I thought this cartoon was funny, and I know my Cajun friends will think it's hilarious! 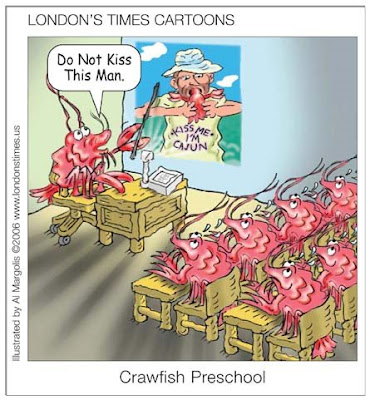 I think I glossed over the details of the crawfish boil last night - and for starters - I don't know how many of my "yankee" peeps (those of you up north) know exactly what that is. Crawfish typically come from Lousiana, now that's not to say that they don't have them other places - but the peeps of Louisiana have made crawfish popular. 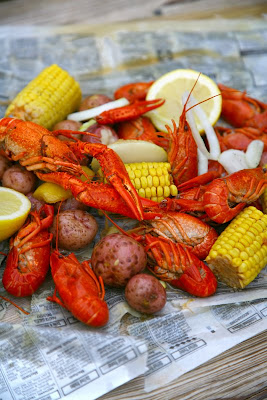 This is pretty much the traditional set up, at least at the few crawfish boils that I've been to... If you look closely - most people eat multiple pounds of these critters - because it's mostly shell. It looks like a lot of work for little meat, but people really seem to enjoy these.

The traditional way to eat them is:

Crawfish are eaten with your hands (don't ask for utensils; you will only be laughed at). Don't be intimidated by that big pile of cooked crawfish.

With one hand, grasp the crawfish head. Grasp the tail with your other hand. Gently squeeze the tail end of the body close to where it joins the head. Hold the head steady and gently twist the tail end, still applying pressure. The meaty end will twist out of the head.

Put the head aside for the moment. Slide a finger or thumb under the first few segments at the top of the tail and peel away the top partially expose part of the tail. With the shell still partially intact, bring the tail meat to your mouth and sink your teeth into the exposed meat.

Chomp down on it, and it will pop into your mouth as you leave the tail behind.

The part that shows if you are a true Cajun or not is if you eat the head. Take the head and suck the hot, spicy juices out of it.

It's the last part that really does me in... but we lovingly called that the Cajun bong last night. I don't even quite know where that came from, but we all got a huge laugh about it.

So basically, I don't eat seafood of any type... so I'm not much fun at crawfish boils - I also am a spicy food wimp... so that's another reason that I typically don't participate... but lots of people swear by them, and get extremely excited during crawfish season. A lady at my office in particular gets crazy about these things - she goes to a crawfish boil every weekend during the peak season... and even forces us to go out to lunch some days so that she can eat them during the week too. The typical season runs from March through June - so she must get her fill during that short time until the next year.

We've been invited to another one in a couple of weeks - the family that hosts the next one has an event like this every year. There are lots of kids at this party, and typically half of them end up carrying around a "pet" crawfish for the afternoon, and I know those poor animals probably just wish that they'd be shown the same mercy as their brothers & sisters that are getting boiled! Last night - there were a few running around the bottom of the pool... so if nothing else - they are always entertaining!

Hopefully my friends that are around me at these parties don't think that I'm a weirdo or a diva... I just have never been a fan of the stuff, and now that I hardly eat much at all - I'm really not that adventurous - I think I'd make myself sick because the food is spicy, and I can't drink within 30 minutes of eating... so that would leave me burning for 30 minutes!!