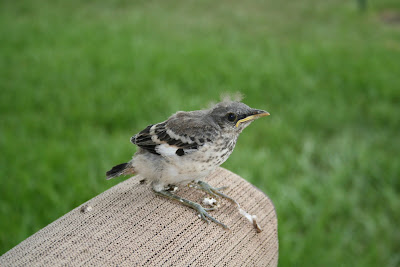 We found this little guy yesterday in the yard... it appears that he's just learning to fly, and John picked him up with some gloves and carried him over to one of the open lots around our house. I found him again this evening on our patio furniture making a mess... but I think I've named him Paco. If I can keep him away from the dogs - he'll be fine and continue to grow.
After finding Paco tonight on the furniture out on the patio - I got a call from Maria, my best friend that is in the Navy. I haven't talked to her in a couple of months, but as usual nothing changes - we just pick back up like we talked an hour ago. It seems that she graduates from her Naval Officer training in August, but just found out today that they are sending her to Japan for her first tour.
Japan is considered a fully deployed area (combat area) and she'll be there for 30 months. Of those 30 months, she'll be out on a ship for 18 months. She got this assignment because she and her boyfriend asked to be deployed together, and in order for them to make it happen - this is what they have to do. So now she's got a million things to figure out over the course of a month - do they go ahead and get married now or do they wait until they come back... do they take their cars or let the Navy store them... where are they going to live... when do they need to report for duty?
You can see how for a type A personality - this can be a VERY stressful situation. I pray that she will be safe, and that this is actually a good experience for her. I pray that she'll be able to email and communicate with those of us here in the States as often as she is able... so that we all know that she is safe. I have a feeling that a web cam might be in my future - so that we can talk over Skype when we can.
The good news is that when she graduates - she'll be able to come home through Texas on her way to the next assignment, and she's planning on spending a day or so here with us!! I haven't seen her in almost 4 years... so I'm thrilled about that part! She also thinks that I could potentially fly to Japan to visit on a military cargo flight (which is very similar to our normal flights - just not quite as luxurious) and only have to pay the taxes which would amount to $20 to get to Japan!
So I am shocked and scared for her, but trying to be strong because we knew this was a possibility. It could be a lot worse, but it came as a big shock to her today - and was not what she expected. She thought that they'd be assigned to Virginia... which I can see how this option is quite a blow compared to Virginia.
Maria, we're here for whatever you need... and we're praying that you and (your) John are safe in your travels. We pray that you'll be able to safely complete all your assignments and duties, and come home to us as soon as possible. We love you, and know that Japan will be a better place for having you both there temporarily. If you need tastes from home - I'll become great friends with the Fed-Ex people... and send you refried beans or whatever you need. Pop Tarts? Hamburger Helper? Whatever other ultimate American products I can think of... HA! Maybe ya'll can send us some sushi in the meantime...
Posted by Kim H. at 8:28 PM
Email ThisBlogThis!Share to TwitterShare to FacebookShare to Pinterest
Labels: Friendship, Furry Babies