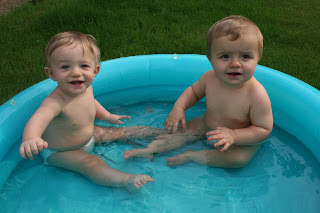 These first few photos are from July 4th. We let the boys play in their pool while we grilled dinner. I didn't have their swimmy diapers - so we let them go in their regular ones. They filled up with so much water that I thought they were cutting of their circulation. Tyler doesn't really enjoy being in the pool - so we took him out for cuddles while James played. 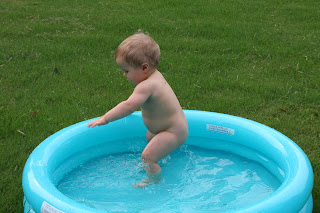 My little nekid baby playing in the water. He of course had to practice pulling up. I'm saving ya'll from the naked baby butt shots that I got while he was playing too. 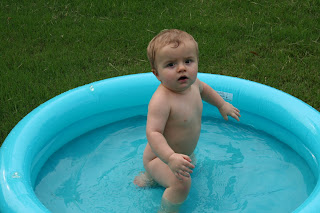 He's sooo going to kill me for these photos one day! He was having so much fun - there was a pretty epic fit thrown when Daddy got him out to come eat his dinner. 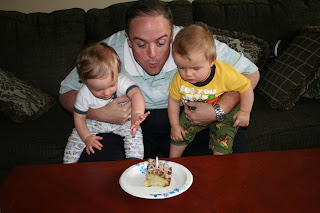 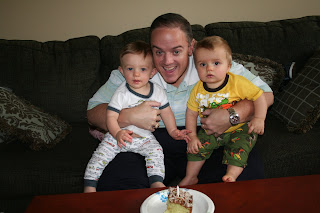 We took John to Benihana's for his birthday, and this is a shot of him blowing out his candles with the boys. It was his first birthday with Tyler - so we tried to make it fun. 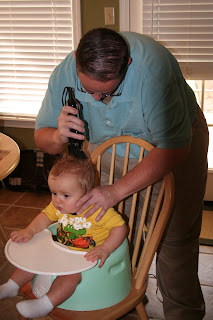 This past Saturday, we had some more portraits taken of the boys - and attempted family photos... but that didn't work out too well. So on Friday night - both boys got a hair cut. It was James' 2nd haircut and Tyler's 1st. I can't say that either of them enjoyed it too much... but we tried to entertain them with Veggie Tales. 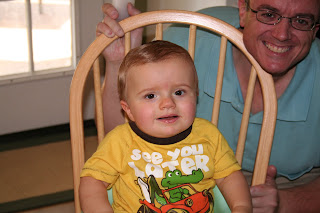 Is it over Mom? Can I go play now - or eat dinner and then play? Poor guy doesn't he look just disgusted with us? 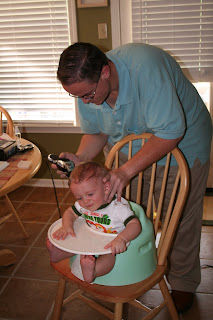 Tyler was pretty ticked off about the whole thing - he didn't like having his head held to cut the hair. They certainly look older when their hair is short! 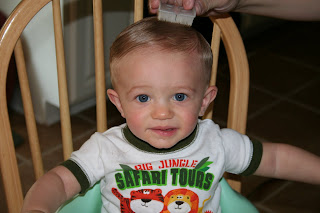 All done! Ready to clean up and eat. He still looks a little less than impressed with the whole process. HAHAHA! 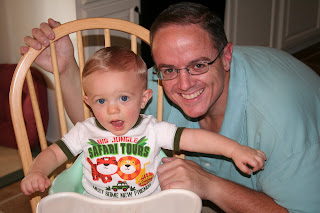 Tyler and his friendly barber... hahaha. Sorry buddy, Daddy like short hair - so you're gonna have lots of hair cuts in your lifetime! 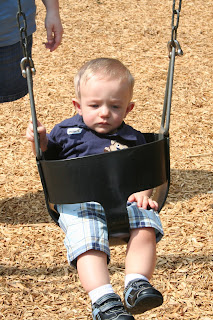 After the photos, we took the boys to the park. Tyler was not an enthusiastic participant. Poor kid looks miserable when we do stuff outside. 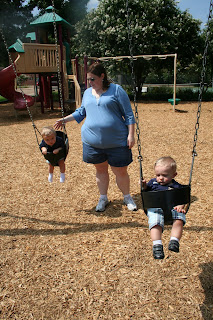 Swinging - I actually sat in a swing next to James and took a turn - which made him laugh. I guess Mommy's look silly while swinging? 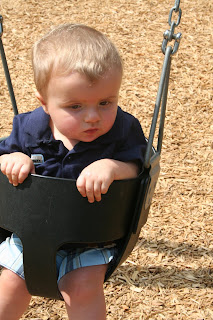 He had a lot of fun - but the swing wasn't his favorite part... we let him play on the slide - which he enjoyed SO much! 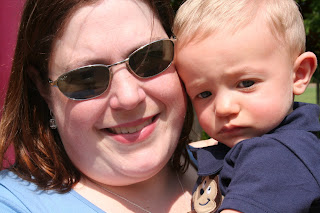 Trying to make my TyTy have a good time. He wasn't having any part of smiling for most of the 20 or so minutes we were at the park. 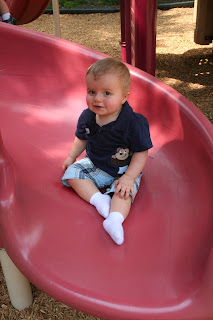 Silly boy playing on the slide. He had the best time trying to crawl up the slide... then loved it when John helped him slide down. I think we'll be hanging at this park quite a bit when they get a little bigger. 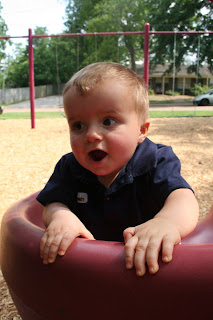 Isn't his face priceless here? HAHAHA! Having so much fun! 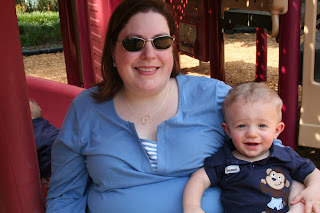 A smallish smile-like facial expression. Oh, Tyler - I love you buddy... you're gonna have to learn to enjoy the outdoors to keep up with that brother of yours! 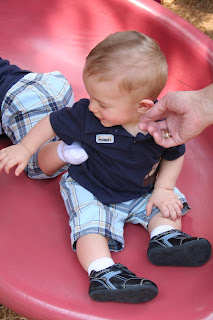 He had a little bit of fun sitting on the slide - and you can see his brother's booty in the background... he was having a blast. 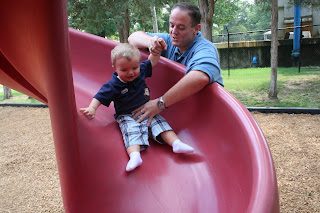 Wheeeeeeee! Enough said! He wasn't too thrilled about having to leave the park either - but we needed to get Tyler home. 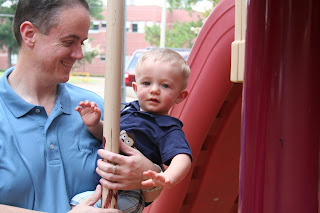 Tyler being told about how one day he'll slide down the pole and run around like crazy. He doesn't look too sure about all of that business though.

Our portraits didn't turn out so great - a couple of cute shots of the boys individually... family shots were not that great... and the ones of just the two of them didn't happen. The only shots they got had the back of James' head and Tyler looking at him - not the camera. HA! I guess it'll be a year or two before we get too many good photos of them together that are posed.
Posted by Kim H. at 9:00 AM
Email ThisBlogThis!Share to TwitterShare to FacebookShare to Pinterest
Labels: Family, Mommy Diaries