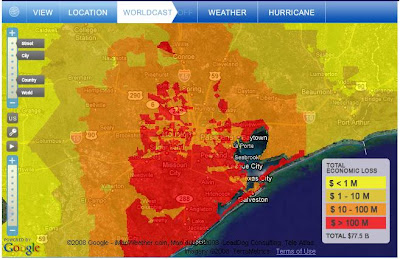 If you open this picture up - toward the top portion of the red section - you'll see a 6... I live in the red dot attached to that 6... or just above the 290... it's hard for me to tell exactly because I can't open the application to get a better view at my office.
In the last 24 hours or so - Ike has taken a turn for Houston. It actually might not be a direct hit on Houston itself, BUT if it goes through Freeport, Texas or anywhere north along the coast - we're in big trouble. (Which is exactly what we're looking at now)

In all honesty - I live a good hour to hour and a half from the coast, but believe me problems with these storms are widespread. My office has already closed for the day tomorrow, and it still remains to be seen if we end up working the entire day.... but that's not where the crazy is.

I started off this morning thinking about all the things that they tell us to have in our "Hurricane Preparedness Kit" - you know, the one that for at least the last 8 years... I've ignored needing. I'm not sure that it matters - because it doesn't matter what happens - every time a storm looms... people are out there stocking up on everything imaginable.

So anyway - this morning, I dropped John off at his office and started driving to mine... we had decided to fill up the car in the event that we have an extended power outage or gas problem and need to get by for a few days - or get out of dodge!

I pulled into the gas station, and start to get out of my car... and this lady in a ginormous SUV starts honking, shaking her finger, and yelling at me... apparently she wanted the pump I pulled into, and like a moment out of Fried Green Tomatoes - I must have swooped in and taken her spot. It didn't exactly happen that way - the pump was open and I pulled straight in... I don't even think she was there at the time! Crazy #1...

I then decided to use my lunch hour to get some supplies to make sure that John, the dogs, and I will be fine for a few days... and cue Crazy #2-2,000... I work in a smaller very yuppie-ish side of town now, and you don't typically expect people to act like they are today. I got to the store, and it was a complete madhouse! They still had water, but most of the other basic necessities were gone... so John and I have a few protein bars, water, peanut butter, crackers, and Oreos. (Yes, because you can't survive a hurricane without Oreos!)

I stood in line to check out for literally like 45 minutes for those few things!

Now, when you think about hurricane preparedness - what would you put in your cart? For me - it's water and some food items that we can eat for a short period while the power might be out... not these people! They were buying huge family packs of meat... yeah, cause when the power goes out - that'll be helpful. More than that though - the number 1 thing I saw people buying was alcohol.... wine and beer a plenty for these people.

I'm talking about several cases of beer in carts, or 6-8 bottles of wine... it's not a wedding people... it's a hurricane! Maybe I'm over sensitive to this because it's been literally 8 years since I've had a drink... and I'm not opposed to people doing it, but seriously - that's part of your survival kit?!

I worry about my dogs running out of food - but these people are worried about their buzz wearing off!

I just hope that the evacuation is going better this time because - I don't cherish the prospect of sitting on the freeway for hours to get home tonight.

On a very serious note:

You guys while you're praying over the next few days, please pray for safety from the storm, the relief efforts, and all those that will be recovering from damaged homes... or worse.

Also, please keep my friend Renee over at Right Foot Forward and her family in your hearts and prayers - she lost her uncle yesterday very unexpectedly and is dealing with the grief and mourning process.

I will update you guys on how we're doing with the storm as much as possible... but if for some reason - I can't blog - know that I'll be back as soon as is humanly possible.
Posted by Kim H. at 12:28 PM
Email ThisBlogThis!Share to TwitterShare to FacebookShare to Pinterest
Labels: Hurricane Ike