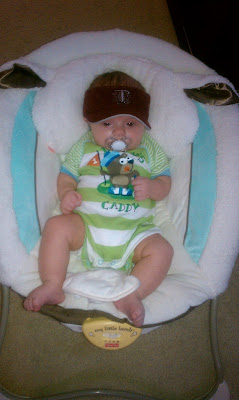 This was Mr. Chill on Monday while hanging out with his Daddy - he had a great day, rested and relaxed... and was 100% fine.

Then came Tuesday... and wow... he spent the majority of the day with the sitter crying and fussy - we determined that we're fairly sure that he's teething. He's got the symptoms - drooling, fussy, chewing on anything he can, and on Tuesday he wasn't eating very much at all.

Yesterday was better, but he got fussy toward the end of the day - and had a bit of a fever... so this morning Daddy is taking him to see the doctor. We're hoping that it's nothing, but Miss Amanda thought it might be his ears - so we're getting that checked out. It's also a good time to ask her about adding some prune juice to his bottles and how to help him with constipation as we get ready to add some cereal into his diet in the next few weeks.

He is absolutely in LOVE with Baby Einstein's - Baby Beethoven

video... he will sit in his bouncy seat like he is in the photo and just talk to the screen... it's the cutest thing ever. It actually is one of the few ways we've been able to calm him down when he's gotten super fussy. We also have the Baby Mozart

video as well, but he doesn't seem to like it quite as much...

Yesterday, we accidentally left his new teething tablets (we've yet to give him one) at Miss Amanda's house - and he was SUPER upset by the time we got home... crying hysterically and so I ran out to the drug store to pick up another bottle of them, and literally by the time I was paying for them... I got a text from John saying that he was in his bouncy seat watching his movie - happy as can be. Stinker!

It was funny because when I got home - John was telling him how he didn't expect that he'd take over our television quite so soon. HAHAHA! Whatever it takes to keep them happy, right?

Hopefully the doctor will have good news when they see her at 8:45, and from there he's spending the rest of the day with Aunt Susan... hopefully that'll go well for Susan - since he's been having a rough couple of days... if she'll keep him close to his bouncy seat and his swing - she should be fine. I'm hoping to be able to get out of work a tiny bit early to get home to my little guy and take care of him too. It's days like this (and really the last couple of them) that make it even harder to get up and go to work... because I want nothing more than to stay by his side and take extra care of him.
Posted by Kim H. at 7:44 AM
Email ThisBlogThis!Share to TwitterShare to FacebookShare to Pinterest
Labels: James