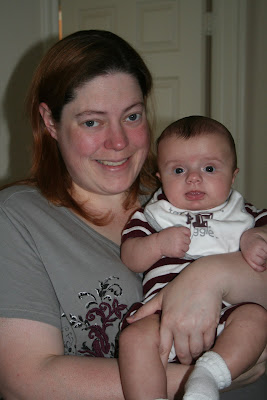 Ya'll... in a little over 9 weeks at the most... I'm going to have TWO of these... anyone else think that's just CRAZY?! I'm still not always sure what to do with the one that I've got... much less how to deal with/take care of two of them.

Blessings come in abundance - and all at once for us... and we'll happily take them, but I can't say that it doesn't come along with a few nerves and a little healthy fear. Especially tonight as I sit here at 3:30 in the morning with James... who is full, happy, and should be sleepy... but the kid just doesn't want to sleep. AT. ALL.

I've tried all of our normal things... rocking, patting, more food, swinging... I refuse to put on his video at 4:00 in the morning, but other than whiskey... I've tried just about everything I can think of. I guess it's a good thing that Mommy has a doctor's appointment at 2 today - so at least it won't be a full day of zombie-ness. I'll likely try to fake out my system with a decalf coffee from Starbucks on the way to work too - but of course that's more of a pacifier for me than actually something that will help in anyway.

My body seems to be playing tricks on me with the blood pressure and stuff now - so I've got some serious concerns to talk to my doctor about this afternoon... I'll save the details until I hear her opinion and figure out what we're going to do. It's nothing super serious - but a dear friend of mine from high school who is an OB resident - has been giving me some guidance in the form of a second opinion. It's no secret that I've been less than happy with my doctor in some areas - so I checked in with this friend, and she's concerned about these symptoms as well... so it's time to stomp, scream, and/or cry until my main doctor hears me and talks to me about what is going on.

I hope ya'll have a GREAT day, and I hope that I can get in some sort of a nap when the little man and I get home this evening... hopefully a little earlier than normal since my appointment will likely finish out my working hours.
Posted by Kim H. at 5:14 AM
Email ThisBlogThis!Share to TwitterShare to FacebookShare to Pinterest
Labels: Mommy Diaries