Tyler is officially off of the CPAP machine today, and when we were upstairs he was on 26% oxygen. He is holding his own with that therapy right now, but still struggles if he gets upset. John did talk to the nurse though and got some sort of an idea of what the course of action is. Tyler has to cross three hurdles before we'll be able to take him home - and she said that she thinks it would be about a week or maybe two before he'll hit all of the bench marks. Of course, that is just her guess and no one really knows - it could be faster or slower - it's all up to Tyler right now and how quickly he moves from one stage to the next.

He will have to show them that he can do three things:
In the meantime, we crossed an important hurdle today regardless of these other three things that my tiny man needs to accomplish. Today, I got to hold him for the first time... it was a beautiful moment that brought John and I to tears. I was thrilled to be able to hold him, and I think he enjoyed it too - he grasped hold of my finger and didn't let go the entire time that they let me hold him. I only could remove him from the warmer unit for about 30 minutes - which is the time that it takes for his feeding to be put in through the feeding tube - so we just sat together during that time.

We only want him to have minimal stimulation at the moment still because resting is what he needs the most right now to continue to get better. He also has a little bit of jaundice - so they have him under the photo therapy lights working on breaking up that billirubin that is in his system.

Here are a few photos of Mommy getting to hold her tiny man this morning... 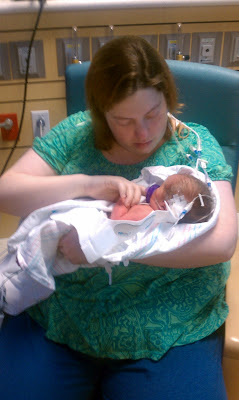 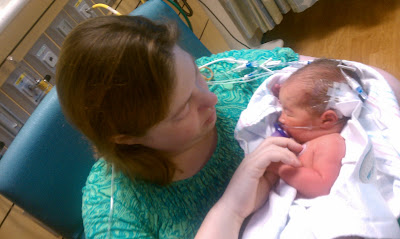 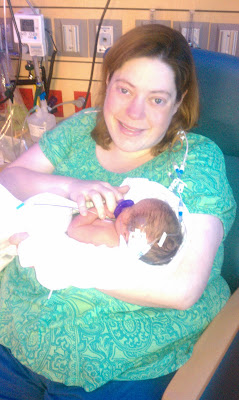 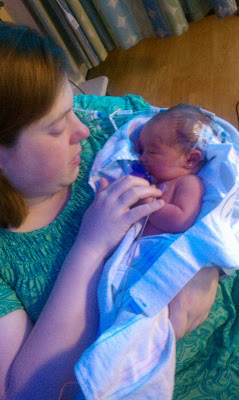 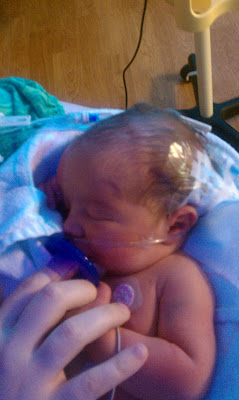 Posted by Kim H. at 4:36 PM
Email ThisBlogThis!Share to TwitterShare to FacebookShare to Pinterest
Labels: Tyler