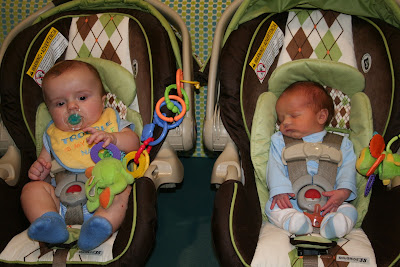 The past few days/weeks... I've been doing a lot of thinking about the journey of life. For my family, it's been a bit of a crazy ride. Things haven't come easily for us, but looking back on the journey of the last 8 1/2 years... it has certainly been worth the struggles. Those struggles have made John and I closer and certainly better people overall... and likely better parents too - but I know the jury will be out on that one for a while.

John and I met while I was still in college in 1999... little did we know what life had in store for us. In 2002, we married... and while he'll tell you that we were immediately trying for a baby - we weren't preventing one from joining our family right away. About 3 months after we were married, I was diagnosed the first time with diabetes - I went to the doctor that day thinking that I was pregnant and in a big whirl of bad bedside manner doctor experience #1 - I found out that I was far from that reality.

Over the course of 5 years, I worked with many doctors to try to get my diabetes under control... including a fertility specialist that basically fired me as a patient because my sugars wouldn't respond to his treatment. He told us at that time (2004, I believe) that we would be putting our baby at GREAT risk if we would have gotten pregnant at the time. We left that doctor feeling very defeated and scared about the prospect of ever having a healthy baby.

In 2007, I was given the option of weight loss surgery - which was likely to cure my diabetes and other health problems. It wasn't an easy road getting to that surgery either - after 6 months of working at jumping through the insurance hoops to get the surgery paid for... we found out that our insurance plan had a specific exclusion and it wasn't ever going to happen. Luckily, an angel stepped in and helped make that surgery a reality for me... and even though it wasn't as successful as it could have been in terms of weight lost - my health overall drastically improved. That surgery was in November of 2007, and from there they tell you not to try to get pregnant for 12-18 months.

We waited until January of 2009 to get back into the active fertility game... and through many treatments we learned in September of 2009 that the doctors didn't believe there was anything else they could do to help us get pregnant. They couldn't get my body to respond to the treatments, so we walked away again defeated - but strong in our faith that God was going to provide the child that we so desperately wanted.

We felt that God was leading us at the time toward adopting a child, so we started that process in October 2009... officially starting our home study in January 2010. Amazingly, in February 2010 - we were selected by a birth mother for a baby girl... we were at the hospital when that baby was born... but in the end the mother changed her mind. It was heart breaking beyond anything I'd ever known... in ways it felt worse than a miscarriage because it wasn't that our baby had passed away - it was that someone else chose our fate and was raising the baby instead. We once again trusted God to provide the baby that he meant for us to have...

In April, we met the first little bundle of joy that we'd meet in 2010... we were selected by another birth mother and James was born. We were there when he was born (not in the room) and met him in the nursery of the hospital... we were allowed to give him his first bottle, and were there for his first bath after birth. It was a magical time for us... we spent 48 hours at the hospital with James before the papers were signed and be became a part of our family.

The very day that we brought James home - we found out that we would be meeting another bundle of joy in 2010 because I was pregnant. We didn't know at the time how far along I was, but while fear jumped in... we knew that God was in control and taking care of us. A week later, we learned that I was not only pregnant... but had missed my first trimester completely. (I didn't miss the illness... I just didn't know what it was!)

To be fair - on a side note... I have to tell you that I was VERY sick... but I experience long bouts with nausea often in my life and infertility journey - so it just wasn't something I was willing to look into because I knew that it was just stress or something like that - and figured that once we got James home it would have gone away.

In October, Tyler was born... and not without some issues at birth as most of you know. He spend 11 days in the NICU for respiratory issues initially - and those were some hard days for me. Once again, I had to rely on God to get me through it... and he did with flying colors... on Monday... Tyler will be 4 weeks old!

Where am I going with all of this recap? Well, my point is that in all the critical moments - we've hit our knees and trusted God to work it all out in his way for the better of his kingdom. We haven't always understood the timing or the heart ache that was needed along the way... but we've been blessed beyond measure.

We are in one of those moments again right now, as yesterday I found out that my job is no longer available to me. My employer chose to hire someone to replace me while I have been out on disability - because about a week ago my FMLA coverage expired. Two maternity leave periods in a year exceeded the 12 weeks of job protection coverage that the government has allowed for us. Sadly, it all happened right as I was cleared to go back to work on November 15th - so we were only talking about 2 more weeks of them needing to hang in there for me.

Ultimately, I know that this is all according to God's plan, and it is a blessing in disguise - we just don't know what the blessing is yet. It is scary for us, and certainly stressful... but I am looking for an opportunity in any location that I can - we just have to hang in there and know that once again God will take care of this... because he already knows where I'm going and what I'll be doing. I can only hope that it is a good opportunity, close to home potentially, and certainly more family friendly... because that's the most important thing in the world to me now... my husband and my boys.

So, once again - please keep us in your prayers... pray that the perfect job opportunity presents itself as soon as it can... and that once we get that piece of things figured out - that many God will give us a little time off to relax and enjoy a little time at the top of the mountain with our boys.
Posted by Kim H. at 4:07 PM
Email ThisBlogThis!Share to TwitterShare to FacebookShare to Pinterest
Labels: Mommy Diaries, Work Craziess