When I was in college, a dear friend of mine would always call right before an exam to sing me the 80's song Eye of the Tiger... and then we'd jokingly do the Rocky Theme together... just to pump ourselves up and get in the zone for a test.

So this morning when I woke up with two sick babies... and needed to take them to the doctor - I instantly started humming both of those to myself. It was my first attempt at taking both boys somewhere and getting out of the car alone. We'd ventured to the Starbucks drive thru... but that had been it up to today.

We got all loaded up, in the car, unloaded... checked out by the doctor, and back in the car without any major meltdowns! WAH HOO! It was time for both of them to eat at the doctor - so there was minor fussiness in there, but I fed them both and they actually fell asleep on the way home. It was so great - I drove around for a little bit and made some phone calls that I needed to make.

Here is James sitting in the stroller at the doctor's office. He looks SO big! 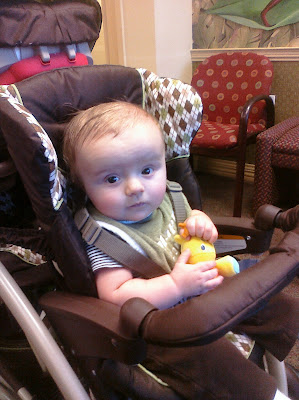 Both boys have colds, but nothing that the doctor said warranted any medicine. If James isn't better by Friday - he'll get a decongestant - but other than that they checked out great. James weighed in at 18 pounds 8 ounces... and Tyler is now 10 pounds 4 ounces!! Tyler has gained 4 pounds since we've gotten home... or extremely close to it - and he's only been home a month! I'm not sure what James weighed at 6 weeks old... but I don't think it was that much. Ty is really starting to catch up in the weight department.

This past weekend, we had a visit from one of John's cousins and his wife. Melody made James the cutest cross-stitch for his room, and is working on a Noah's Ark one for Tyler that we should get around Christmas. 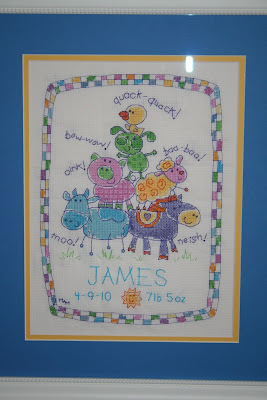 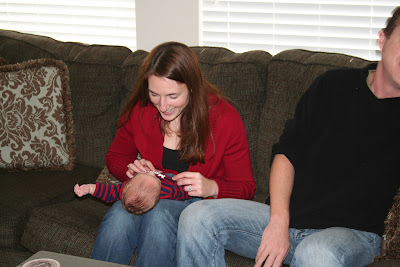 Here she is playing with Tyler.

When we got back from the doctor - James played for a bit with a new toy... and Tyler slept... 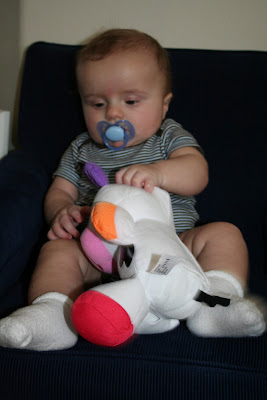 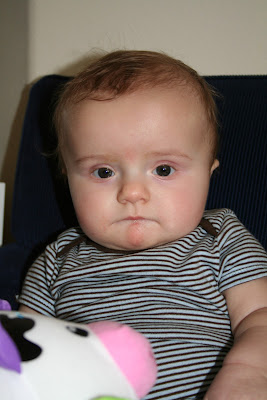 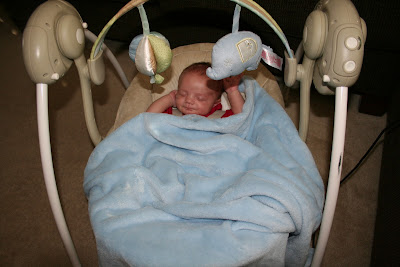 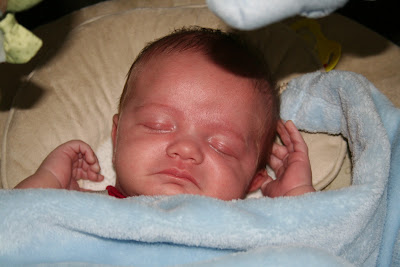 And now... I have to show you a BIG part of my daily existence right now... laundry. Can ya'll guess how many days worth of laundry this is for just the boys?! 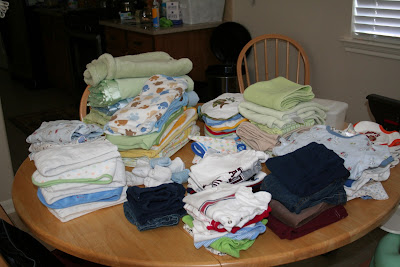 Well, I finished laundry on Friday before John got home from work... and completed all of this in the last two days. If that's not crazy enough... I have all of this to wash because they're both growing into a new size at the moment... 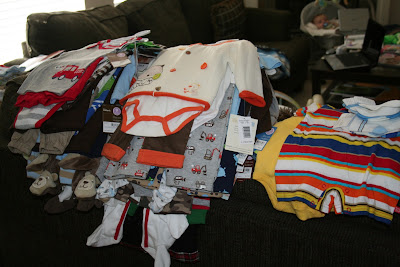 It's crazy, but I'm so glad we have it all... Tyler is going to use some of James' old stuff, but none of that is long sleeved for the cold days - so he's got a few things in the pile for that. There are also matching outfits of a couple different styles, and of course their three Christmas outfits... one of which I'll put them in to get a picture in front of our Christmas tree when it goes up - my goal is to have it completed by Sunday.

Any of you know if most of the places in the mall where you'd get the kids pictures with Santa... do they have digital packages? I'm just thinking that I'd rather get a CD with the photos than have their printout... but I don't know if they do that yet.
Posted by Kim H. at 3:53 PM
Email ThisBlogThis!Share to TwitterShare to FacebookShare to Pinterest
Labels: Mommy Diaries