If you haven't entered the Holiday Themed Give-A-Way yet... skedaddle over to this post and get your entries in before the deadline!

I think life is kicking John and I while we're down right now... and what can you do about that? Not much. I guess in time we'll just laugh about it, but today it feels pretty poopy. The boys absolutely are sleeping terribly right now... which is to be expected for Tyler, but James is having some serious issues the last few nights.

I don't know what to make of it - teething? jealousy? growth spurt? new room? - I have no idea, but it's making us borderline certifiable... from the hours of 1-5 there isn't much sleeping going on for this Mama... or really anyone in the house. In addition, Tyler eats just about every 3 hours... but is going through something where he is just fussy all night long - laying him down flat in the bassinet just doesn't work for him. He either wants to be in the bouncy (which for some reason makes him happier during the day than at night) or touching one of us. John can get the boys to sleep a little bit by snuggling with them, but I can't because of the pain in my shoulders that I'm being treated for.

Oh yes, I've somehow managed to have a baby and the worst pain that my body is feeling is in my shoulders - I can't raise my arms up even the slightest bit without pain. So, I'm on steroids.. woo hoo... you know that that means? For me, it means that for about the next month - I go blind. Weird... I know, but it is true. Every time I take these things this same reaction happens to me. At least I get some wear out of the $200 pair of glasses I bought several years ago when this reaction happened for the first time.

So, literally - I'm blind, unemployed and exhausted... but then this morning - the world is taking a swing at the husband too... his amazing cell phone landed in a puddle of water - which could mean that it's ruined. It's going through a drying out process right now, and I sincerely hope that it comes back to life! Add to that - two emails from people over petty issues... and we're just a little over our limit. Under normal circumstances - most of these issues would just roll off without any lasting irritation... but when coupled with the whole no sleep thing - it can be overwhelming!

I love these kids with all my heart, but seriously - one night of them cooperating a little so that these two tired parents could regroup would help tremendously! I think we could deal with one of them having a sleeping issue, but both at the same time?! Oiy! 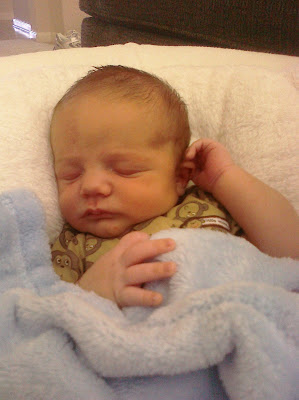 This guy is 1 month old today... I'm not sure what he's doing to his ear in this shot... but it makes me smile. It's like he's trying to hear the television or his music on the bouncy seat better.

Here's hoping that you're all doing better than I am today... I don't even think an IV of caffeine would help me now - but I'm trying to push through it and get some things done... only two weekdays left until I start watching both boys during the day. So if I'm going to finish getting the house organized and nested - I've got to hop to it!
Posted by Kim H. at 11:33 AM
Email ThisBlogThis!Share to TwitterShare to FacebookShare to Pinterest
Labels: Mommy Diaries