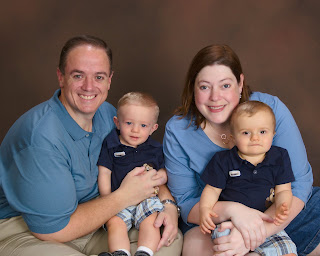 At church yesterday, I sort of fell apart. I held it together for a good long time - through Sunday School... but while standing in the sanctuary during Worship... I lost it. We were talking about grief and suffering in Sunday school, and I was listening to various people give their testimonies.

Well, somewhere along the way - it hit me. Just 2 years ago - I was going through some dark moments. Luckily God was there in a BIG way to get us through those days... I just haven't had a chance to sit back since that time and reflect. It's been one huge change and adjustment after the other - and that didn't leave me any time to think about where we've been.

This time in 2009 - we were rounding out the last of our fertility treatments with very little hope left of having a child naturally. Within the month of September, the doctor would tell us that there wasn't any hope with fertility treatments. They couldn't get me to produce an egg... so no amount of drugs would help with that situation.

We in turn told the doctors to stop treatments on the prompting of God, and turn in a different direction - adoption. We started the process in October of 2009... had a failed placement in February 2010... and in April 2010, we got our sweet baby James. On that very same day, literally. We signed the papers in the early afternoon - brought James home... and at 3AM - I took a pregnancy test.

When I tell you that I leaned on God in ways that I never would have imagined during those months - I don't think you can even understand. There I was in the fall of 2009, hearing the words that I feared the most... from the fertility specialist... and I didn't fall apart. Only by his grace, truly.

Thankfully, I have a prayer journal that I kept through those days in 2009 - and reading the emotion and seeing where I was at that time is amazing. I remember being incredibly angry with God, and crying out to Him - even yelling at Him some days. He's a big God, and can take it... the one thing I didn't do - I didn't run from Him. I let him have it - one way or the other. The glory was his, and the hurt was his as well.

So yesterday, I just was overwhelmed by the memories of the suffering we went through - and overcome knowing how much better God's plan was for our family than mine. I prayed for 8 years to have 1 baby... but within 6 months, I got two. The days right now are long and hard taking care of both of them... but the laughs are deep and joyous.

These two will drive me to the edge of reason, but bring me back with one smile or one giggle. I wouldn't trade them for anything in the world, and it's amazing looking back just a month or two in the past to see what they've learned and how quickly they grow! I know it'll feel like just a few seconds and they'll be starting school.
Posted by Kim H. at 11:00 AM
Email ThisBlogThis!Share to TwitterShare to FacebookShare to Pinterest
Labels: Infertility, James, Mommy Diaries, Spirituality, Tyler