Crazed Momma on the Loose


Time, yet again, has gotten away from me - which means blogging falls through the cracks. It makes me very sad when that happens though because I truly LOVE writing. I've missed writing, and missed the connection with the wonderful ladies that read this here blog. (If there are any of you left - holla!)

I've got a bunch to tell you about, but I thought that I'd start with the updates from our well-child visits with the doctor on Friday. They were about 2 months late, but they haven't been well enough to have this visit until now. The bonus is that Tyler doesn't have to go for his 15 month visit at all - and will just go for his 18 month visit along with James' 2 year visit in April. 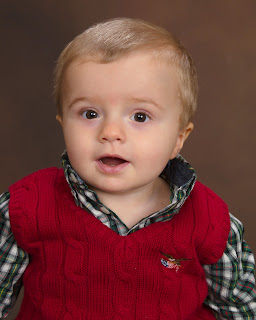 James is doing very well - he's right on target with his motor development. There is some debate on if he is a slight bit delayed on his speech development. There is a thought that he might be slightly behind, but the issue is if that is because of something the doctor called "twin syndrome" - which is the thought that the boys might have developed their own language and don't have the need to develop normal speech as quickly as other kids.

That being said, she recommended that we have him evaluated by the Tennessee Early Intervention Service - and if he needs any help getting his speech going... they can get us that help. He additionally is being looked over by a neurologist this morning for some spots that he has. He basically has a large number of birth marks and a few of them are "big" - they don't look big to me - but they would like him evaluated for a neurological disorder that could be linked to those spots. Additionally, they are sending us to a geneticist for the same spots, but that appointment isn't until April.

While I know that he is developing normally - just hearing neurologist and geneticist - is enough to scare the heck out of any Mom out there. So some extra prayers for us would be appreciated. 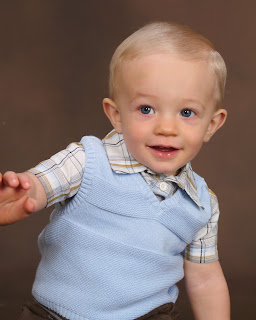 Tyler is doing great - developing normally. I was shocked that his head was in the 95th percentile. His head looks so much smaller than James' - but the doctor reminded me that James measures on the smaller end of all the other curves, while Tyler is pretty proportionate. I was also shocked to find out that Ty is getting all 4 of his 1 year molars right now... he is so easy going - I literally didn't know.

We talked more about the twin syndrome with regard to Tyler. The thought is that for most major milestones - I will have to treat them as such. For instance, James will be a bit late on things... and Ty a bit early. Our first one will be getting rid of the bottle - which we will try after Christmas. (Any suggestions on that are completely welcomed!) The thought remains that things like potty training, moving to a big boy bed, and the like will have to be balanced between the two of them.

Once again, prayers would be welcomed for us today - I fully expect to go and find out that things are fine and we don't need to do any further scanning or anything with James... but there again, I could be completely knocked off of my feet and be in for a big mess of emotions. I will report back as soon as I can... and start working on all the posts that I've wanted to write over the last week or two.

Posted by Kim H. at 8:30 AM
Email ThisBlogThis!Share to TwitterShare to FacebookShare to Pinterest
Labels: James, Mommy Diaries, Tyler