About a week ago, we went to a special Homeschool Day at the Children's Museum of Houston. It was a great day, that the museum closed for the day -- and let us come play at a discounted rate. Several of our homeschool friends were also there, but it was hard to keep everyone together -- as the kids just sort of start running from exhibit to exhibit.We did our best, and had a few minutes together.

The boys had a great time on their first visit to the museum, this was our first stop -- it was a room with a lot of gravity/physics/electricity type of games and simulations -- this was a golf ball table where they had to bounce the balls off of the obstacles and get them to fall in the holes. When they fell through, they dropped down and rolled back to where they are standing. I wasn't sure we were going make it past this toy because they loved it. 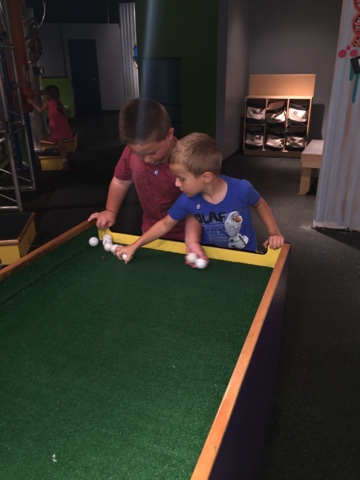 Somehow we rounded around to a room all about letting the kids explore Mexico. They had a VW bus that the kids could pretend to drive, and a moped with a cart on the back so this is all of us piling in with James our little chauffeur. Tyler enjoyed playing with the little Mexican Market, and the home that was made up there for them to be able to make pretend tortillas. 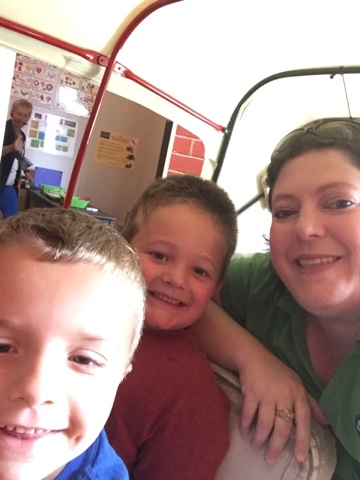 When we walked out of that area devoted to Mexico and found some face paint crayons -- I'm not sure what else to call them, but the boys begged me to give them bunny noses and wiskers -- so I let them do it. Of course Tyler then tried to wipe them off immediately and made a mess on his face. They had sponges in the display for you to get the crayons wet -- to then use on your face -- so he grabbed one of the sponges and wiped it right on his face making his lips and everything green. Oiy! 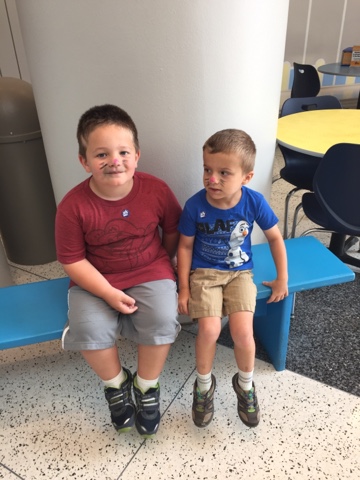 Next up, we find the little city -- it is so great. Everything is set up for the kids to learn about banking, paychecks, jobs, and everything in between. There is a Bank, Post Office, Stock Market, News Station, Election/Government Room, Police Station, Ambulance, Grocery Store, Restaurant, and Vet Clinic. It's absolutely adorable. Each area has a sponsor -- so for the grocery store -- it's sponsored by H-E-B and looks like the inside of the H-E-B stores. The boys of course loved it! 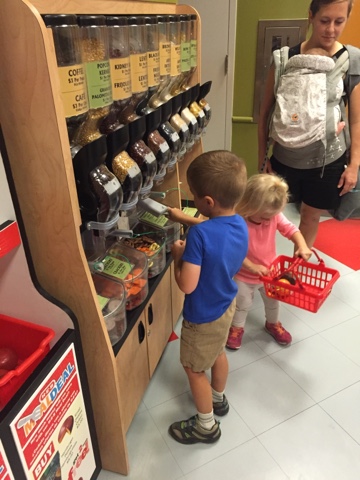 Tyler might have enjoyed the grocery store more than James -- which I thought was odd. I thought James would have been thrilled with getting to play with this. They both loved the one in Memphis that was set up like the Kroger stores there. 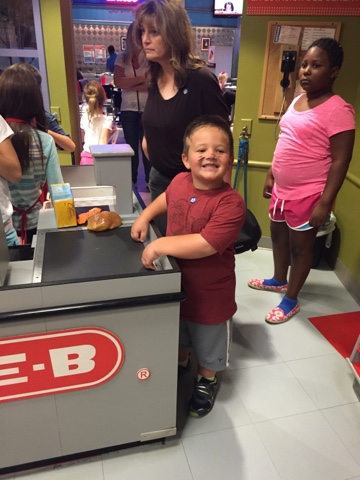 Next up, they hit the vet clinic and played in there for a bit. They had all sorts of cool stuff in there - skeletons of animals, x-rays, food, treats, play animals, even a set of cages for boarding the animals. It was really adorable. They enjoyed it almost as much as the Ambulance... which we hit twice and stayed for a significant amount of time. 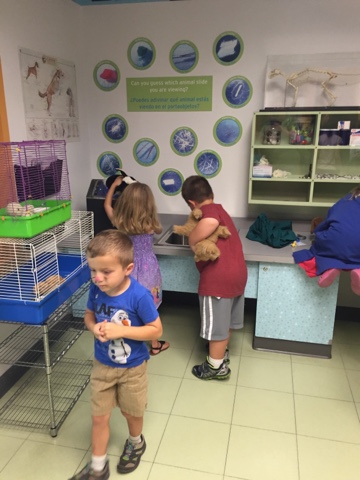 Here we are driving the ambulance... they loved it and the lights flashed when they turned on some of the switches. They played here for a good bit, and in the back of the ambulance as well. This is right up their alley -- because they love playing all things doctor/rescue/fire/police related. 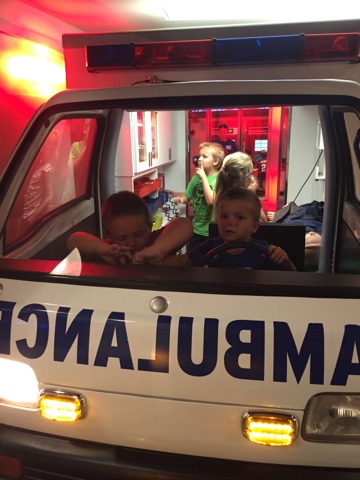 I cracked up because there is a little toy defibrillator there in the back of the ambulance, but James mostly liked giving the patient shots while Tyler wanted to just check his heart all the time. 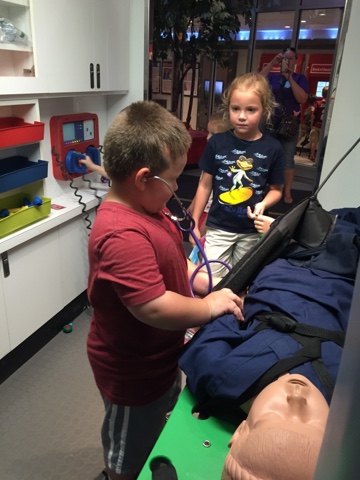 This is James driving the police car -- which is super cute! They have a little crime lab that they can explore in as well, but neither of them had much interest. They also had a deal where you can be the 911 dispatcher and decide who should respond to certain emergencies. 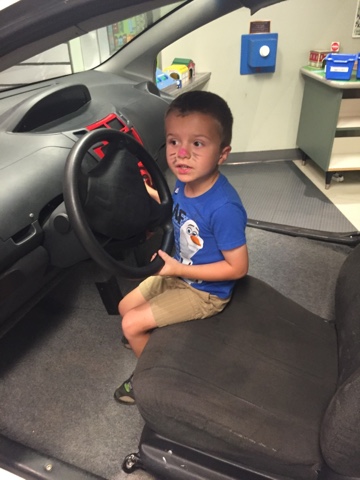 This is Tyler and I in the postal truck having some selfie time. They love taking pictures with us like this -- so I indulged them a little bit. I think they really loved all of this little city. 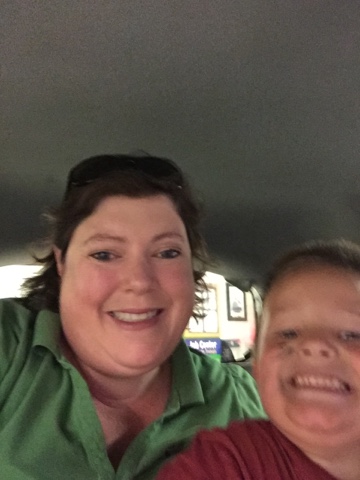 James and I in the same postal truck -- he also loved the little delivery bike too. They also had a bike in the first room we went in that allowed them to ride and create electricity to light up a strip of lights. He really got a kick out of that. 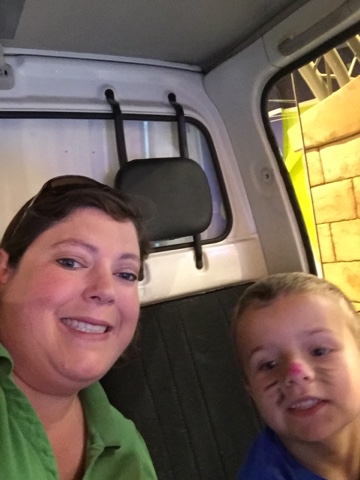 Here we are back in that original room riding on a lift -- there is a lesson in that about something, but we missed it because all he cared about was being lifted off the ground to then slowly fall back down. He made me take several videos of it, which is hard when I'm the one videoing AND pulling the rope to lift him up in the air to fall back down. 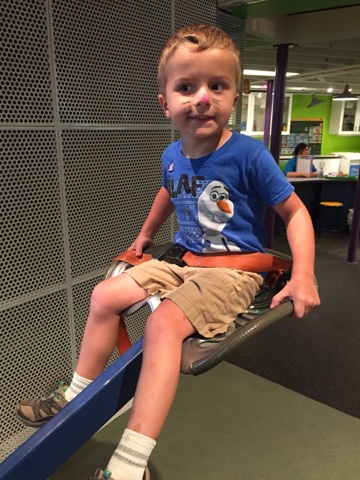 A great time was had by all, until we went into the little gift shop -- I told them they could choose something small -- Tyler picked a little pack of jelly beans, James wanted a $45 dollar school bus. Then he backed of to a $20 school bus... this all ended in no one getting anything -- and me carrying James kicking and screaming all the way out of the museum and to the car. He was still screaming and crying when we got halfway home. UGH! Some days are wins and some are epic losses -- this one was a combination of both.

We are learning a LOT of lessons around here these days -- like how dessert isn't a right... it's a privilege that can be lost. We usually negotiate them into fruit if their attitudes aren't good... but last night they went off the deep end and lost their devices for the rest of the day AND their dessert. Tyler cried himself to sleep and James was fine other than the loss of the iPad.

They are good boys, but this whole idea of disobeying and all of that has been the hardest thing for us to work through. I guess it is for everyone -- but MAN, can they catch on a little bit? We've also been working on proper responses to anger -- like calming down, talking to the offender, and then working on something else to take your mind off of things. Instead of reacting in anger and punching your brother repeatedly... the lesson isn't getting much traction yet.
Posted by Kim H. at 10:28 AM
Email ThisBlogThis!Share to TwitterShare to FacebookShare to Pinterest
Labels: Homeschool, James, Mommy Diaries, Tyler