For our first October meeting, we studied the life cycle of pumpkins. We made a life cycle on a string. 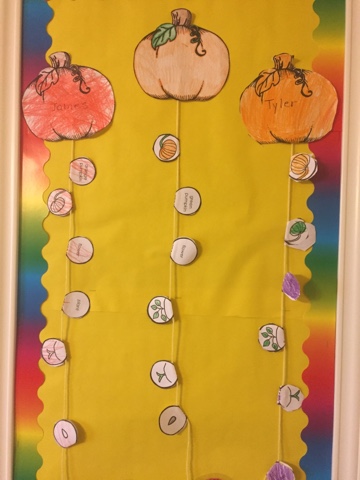 I found it on Pinterest, but I printed the large pumpkin coloring page for them to use as well. We could have made paper plate pumpkins, but I just didn't think of that initially. 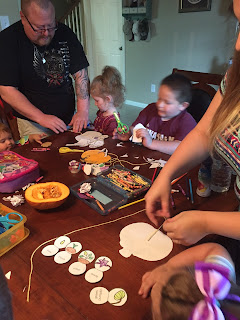 Here are the kids coloring and assembling their pumpkin life cycles. They just taped or glued the stages of the life cycle in order on a string and attached it to the pumpkin.

Next up, I took a small pumpkin pie pumpkin and cut the tops off of them - we did one per child in the co-op. 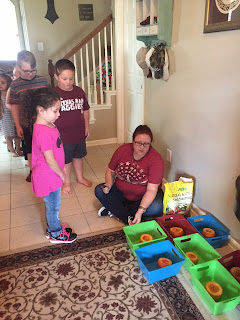 Here the all are lined up - both the pumpkins and the kids! We left all of the seeds and junk inside. Then let the kids come one by one to do the next step. 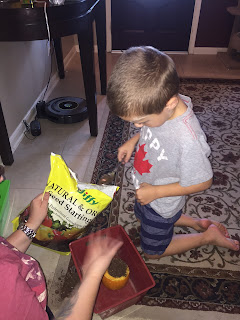 Here is my little, James, putting potting soil in his pumpkin. We added a tiny bit of water and placed them in a sunny spot. 7 days later, we had pumpkin sprouts! Ultimately, ours died, because it rotted out -- but they got to see them sprout and take off with leaves. 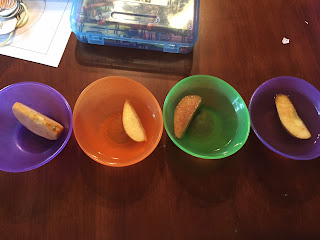 Next up we did an apple rotting project. An hour or so before the meeting started, I cup up an apple. I placed them in small bowls, one I left just in the air. One had water, vinegar, and vegetable oil in them. At the end of the meeting, we let the kids observe what happened.

The kids then spent about a half hour playing out in our backyard on the trampoline and on the swing set. I think they love these meetings and really enjoy the little bit of running around enjoying being with other kids for a while. We really have a great group of kids and parents -- I'm so thankful for them!
Posted by Kim H. at 10:16 PM
Email ThisBlogThis!Share to TwitterShare to FacebookShare to Pinterest
Labels: Homeschool