A little over a week ago, our younger son had his 6th birthday party at our house. Tyler was dead set on having a Star Wars party up until about 3 weeks before his party when he changed to a dinosaur party. John had the best time coming up with names for the food and games for the kids to play. 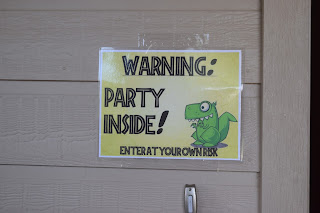 We've been doing Beachbody for a couple of months - so we kept the food on the lighter side for this party, and I think all of our guests were happy with the result.

We had: dinosaur print cookies, a veggie-saurus tray, herbivore mix (salad),
and a fruit-ivore tray 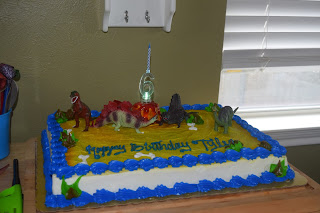 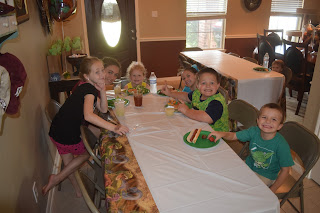 Some of Tyler's guests eating lunch with him 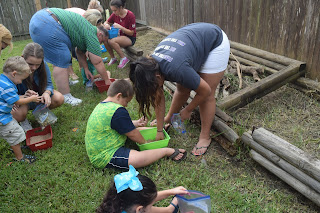 We had a Dino-dig where each of the kids went home with:
3 dinosaur skeletons, 3 gems, and some seashells.

We had "Pin the Tail on the Dinosaur" which I bought from Etsy.

True story on this was we were going to get it printed from Fed-Ex Kinkos, but they wanted $50 for printing it -- so we got the poster sized print made at Walgreens for a fraction of the cost. It was like $14 vs the $50 from Kinkos! The item from Etsy came with the tails that you could print and write the kids' names on or we used the option to print their names on them... then I laminated them the night before the party.


My sister in law - Susan - made the Feed the T-Rex Toss game for us, and our niece - Taylor - sewed the bean bags. The kids had a ball feeding the T-Rex, so it was a big hit!

We let them have a egg & spoon race in teams - they were hilarious! The winning team got  a prize. 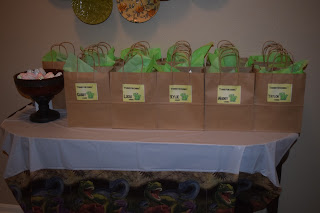 Each of the kids under 12 got: a pencil & eraser set, a tattoo, a couple of dino print cookies, their dino dig spoils, a plastic dinosaur, 2 hatchable dino eggs, and I think that's all.

The 12 and over crowd - which were my little brother, little sister, and 2 nieces -- got 2 dino print cookies, and a note from Tyler with $5. We didn't think they'd want the toys... but oddly enough the 3 girls -- did leave with some toys because they wanted them too. 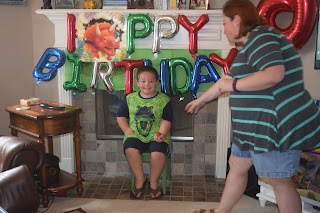 Next up was gift time!

Lastly, of course we had to sing and have cake -- it was a great time and we are so blessed to be able to celebrate our little man with all of his favorite friends and family.
Posted by Kim H. at 3:25 PM
Email ThisBlogThis!Share to TwitterShare to FacebookShare to Pinterest
Labels: Birthday Parties, Food Ideas, Suburbia, Tyler