I don't have much to tell you guys today - work was typical at best... and I'm back in the lovely cozy house that I call home. I'm getting ready to snuggle up and read some more of my new book addiction. So I thought that in honor of not having much to share - I'll finally post some pics from over the weekend.

This is my step-mom, Lynne's, page for the scrapbook. I worked on another one, but didn't get it completed before the Superbowl - so maybe I'll get it done this weekend..

This is the old work bench... it was our old computer desk/jewelry making desk... it was originally bought to be the computer desk, but our last apartment had a built in desk - so John made me a jewelry design studio in our guest closet and I used it there. It never made it in the house when we moved here - but it did a good job of holding John's tools for 4 months. 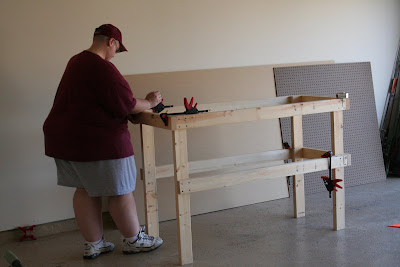 Here he is building - I helped with several parts of it - but the poor thing... when his Dad showed up for the Super Bowl - he accused him of buying it. I guess it was really a compliment, but boy - we had the scratches and bruises to prove our hard work. 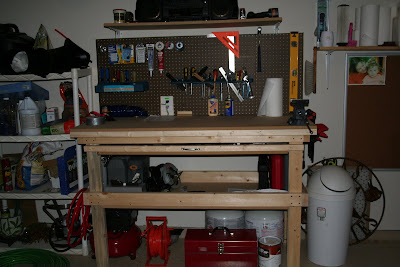 Here is the finished product. It has a drawer in the top to hold some of his tools flat, and then the peg board on the wall to hang some of the other tools. He's really proud of it, and even though I still don't know what he's going to do with it - he got to use the two saws that my parents have given him over the last few Christmases... so that's a good thing.
Posted by Kim H. at 7:25 PM
Email ThisBlogThis!Share to TwitterShare to FacebookShare to Pinterest
Labels: Craftiness