A few weeks ago, I read about a new protein drink that Melting Mama was reviewing for the first time. It's a new product out by Isopure called Isopure Plus, and for each bottle there is 15g of protein. It's a nice little boost in a 60 calorie beverage. It also has added vitamins as well. Now all of that being said, the taste was pretty good. I tried the Alpine Punch flavor - which Melting Mama hit on the head - it's sort of like watered down Hawaiian Punch. The only problem I had was that the smell was a little overwhelming.

That being said - it overall was great... I just tend to be sensitive to ingesting things that I don't like smelling.

I bought both flavors, Grape and Alpine Punch from Bariatric Eating - 6 bottles for $12.99. It seems high, but protein enriched foods are always higher priced... 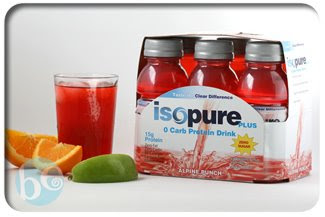 Today, Renee found the 50 Million Pound Challenge for the two of us to join with our husbands and her Aunt. I signed up, and the cool thing is that you get a nifty pedometer and stuff via a visit with a State Farm agent. Now, in my sick little head - this tickles me because State Farm can't beat my insurance prices by a long shot... but I love to watch them try.

So - all of this being said - I'm about to get back to being serious about all of this weight loss business. My friend, Donna, also has contacted me as she's about ready to sell her BodyBugg which could be a really good tool for me to test out, and use to figure what the issue is that keeps me from truly losing the weight I want to lose.

Now if only I could get my dizzy spells and nausea to cooperate so I can get in a workout!
Posted by Kim H. at 2:05 PM
Email ThisBlogThis!Share to TwitterShare to FacebookShare to Pinterest
Labels: Reviews