The second day at the hospital started off a little more scary. I was on the way to the hospital, and I got a call from John - he sounded really scared. Apparently his uvula (the hanging thing in the back of your throat) had been damaged during the surgery by the tubes that they used in his throat, and it had swollen 5 times the normal size. It was causing him to have trouble breathing, and he said it basically felt like there was a finger stuck in the back of his throat.

It took us a little while to get him calmed down, but they went ahead and treated it like it was an allergic reaction... so they gave him some Benadryl. Then they came and got him for his scan to see if there were any leaks in the surgical site. I was able to go with him, and then they put me in one of those lead aprons and I watched the scan along with the doctor and nurse. I've now seen all of John's insides! It was amazing to watch him swallow the dye and see how hard it was for it to pass through because of the swelling. 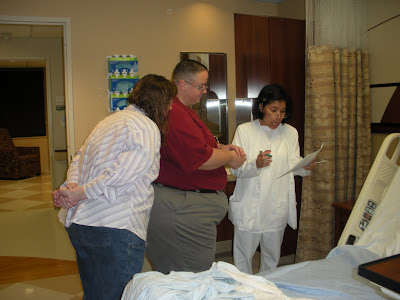 Here he is getting his post operative instructions and discharge papers. 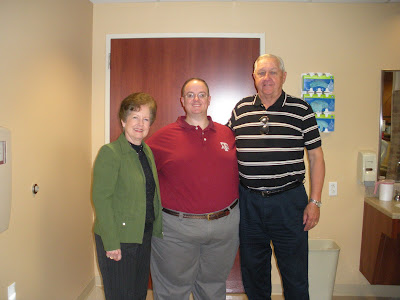 A shot with his parents... seriously ya'll take a look at how dressed he is! I walked out of the hospital after my surgery a whole day later than he is into the recovery here - and I wore pajamas! 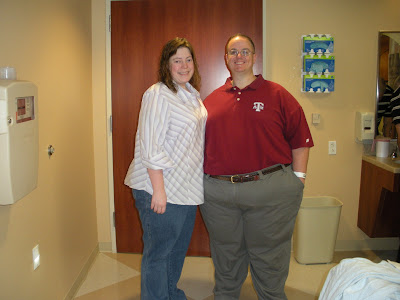 A picture of us together getting ready to load him into the wheelchair. 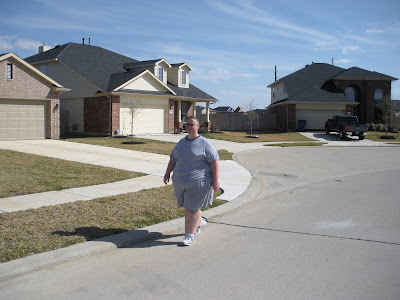 Once we got home and he got a nap in... we went for our first walk of the day.
John was having trouble feeling like all of his fluid intake was getting stuck in his tummy but not moving any further... it just seemed blocked. Then he started getting the shakes - so I called his doctor (who is good looking and wonderful!!) it was amazing... I called the answering service, and she then told me not to hang up. I think like 10 seconds passed and I was immediately talking to Dr. St. Laurent... talk about always available - it was like 8 o'clock on a Friday night!
He told me to keep having John drink stuff - and eventually it would pass through his system... it was the swelling that was backing it up... he also said to give him some straight apple juice and that ought to bring his blood sugar back up - the shaking was most likely a reaction to the lack of calories in his diet.
He was perfectly right on all accounts - by about 4 o'clock this morning - John turned the corner, and has been pretty self sufficient all day. He did his same walking route today in 5 minutes less than yesterday... I'm so proud of him... and I'm not kidding - he'll be running before I will be!
Posted by Kim H. at 7:31 PM
Email ThisBlogThis!Share to TwitterShare to FacebookShare to Pinterest
Labels: John's Journey