Thursday night of course is small group night - which means lots of eating, laughing, and chatting with friends. We regularly have three little girls all around the ages of 2 and 3 that come with their parents to group. (We have about 8 more kids - 2 couples that have 4 kids each - amoungst the other group members, but they have their own sitters.) Anyway - we have a sitter that comes and plays with the girls while we do our actual study. After we are done with our discussion... we have dessert - which means that the kids get to come down and enjoy too.

Shortly before small group started up again, I decided that the best place for my scrapbooks to be displayed is on the coffee table.... the kids absolutely LOVE this. They have the best time looking at them each week, and talking about who is in which picture. It's hillarious when they look at a picture of one of our family members and declare that it's a picture of them. Too cute!

Anyway, two of them were doing that this week and I thought it was so adorable - I had to grab the camera and capture the moment for the blog. Here I give you... L and A... 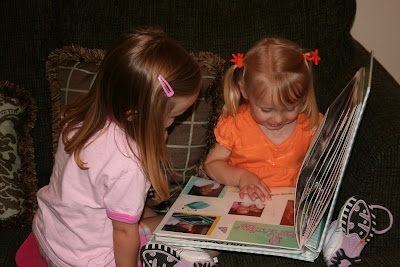 I have no idea what they are talking about, but L looks like she's laughing. 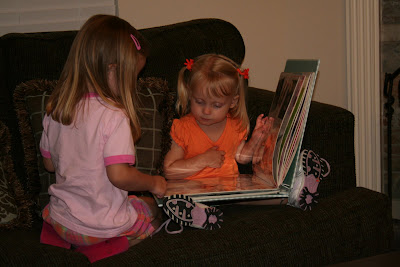 I don't know why, but it just melted my heart when I saw them sitting like this.

Earlier this week, we were checking out the garden... which I think we've figured out that we were watering too much. We were initially watering every single morning... but now it seems to be thriving a little more with being watered every other day or every 3rd day.
Anyway, we've got some tomatoes, a couple of peppers, lots of cucumbers, and our radishes are doing well. Nothing yet from the cantaloupe, corn, peas, squash or okra.
We were inspecting the cucumber plant - which seems to be taking over the garden - and is actually now flowing over the side and down into the yard. Look what we found!! A cucumber - just for effect -I layed a 20 ounce Wal-Mart water bottle next to it so that it might give you an idea of the size. Mammoth cucumber - first veggie out of the garden!
Posted by Kim H. at 8:40 AM
Email ThisBlogThis!Share to TwitterShare to FacebookShare to Pinterest
Labels: Gardening