Crafts and Thank You

As promised - I took some pictures of the crafts that we made on Friday night - and I think they are super cute! 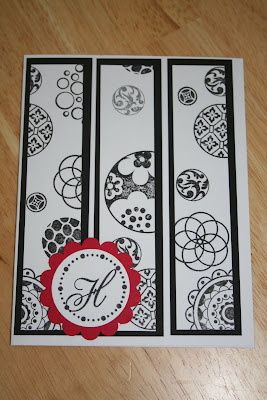 We made these cards - which were super fun. We took a big piece of card stock and stamped all over them - then Danielle cut them down for us... and we made these cards. I made a set of 6, and she gave me envelopes to go with them as well... the only problem left is finding occasions and people that I'd be willing to actually give these cards for... I like them so much I may never part with them! 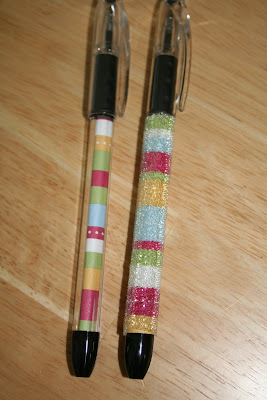 We also made these pens - or well Danielle made mine while I finished up my cards because it was getting late... and we both were getting delirious. The one on the left has the paper inside the pen body... the one on the right has it on the outside with some beads to make it that much more unique. I LOVE pens... so this was right up my alley.

I've gotten lots of comments from this post about our current fertility updates... it is encouraging that you all agree this is current plan is solid and that the testing is a good idea. I too was surprised that the doctor didn't suggest it to us - but over the weekend I found our original paperwork from our first visit with him. Apparently the HSG (I think that's what you guys called it) is pretty far down on the list of tests that he'd order... so it looks like we could have gone through several cycles with the IUI before he'd suggest it himself.

I will update when that gets scheduled - and ask for some prayers - as I've heard that it has been everything from uncomfortable to down right painful... depending on the people mentioning their experience. I've got some pain medicine left from my gallbladder surgery - I'm seriously considering taking it with me... The one thing that I don't know - and I'll ask you guys to give me advice on - is this something that I can do on my own - or am I going to be better off having John there to drive me home after the test? I'd guess that if I took the pain meds - he'd insist on coming with me... but I just want to ask your opinions.

Finally, I want to make sure that you're all on the same page with us - because I got several encouraging comments about people getting pregnant right away after having the test. While it might be extremely helpful for us - because it seems like even if there is no visible blockage - it can clean you out just the same... so I see it as a beneficial test regardless of if they find blockage or not. My point though is that we're still going to have to do fertility treatments because I do not ovulate on my own... there is NO evidence that I've done it ever in my lifetime... so I will for sure need the drugs to stimulate egg production and then another drug to stimulate their release. We also are at a point where the doctor thinks that our only option is to inseminate or do IVF at this point because of the quality of John's sperm. (I can't believe I finally used that word... couldn't think of anything better.) So the HSG won't solve all our problems... but it will help us feel better, and will if nothing else make sure that things are all clear.
Posted by Kim H. at 7:32 PM
Email ThisBlogThis!Share to TwitterShare to FacebookShare to Pinterest
Labels: Craftiness, Infertility