A girl and her Uncle

Earlier this fall, in September, John took our neice Taylor to her annual Aggie football game. Texas A&M has gotten really smart since I've been gone - because now going to a game is so much more than just the experience of the game. They have games, and all sorts of things for you to do with your kids. 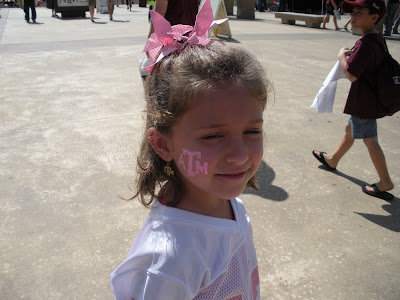 So of course, Taylor got her face painted. What would a day at the game be without getting your face painted? 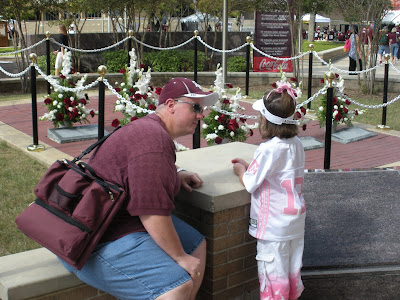 Then her uncle helped educate her about our favorite university on the planet. This is John showing her the cemetary where all of our mascots are burried when they pass away. 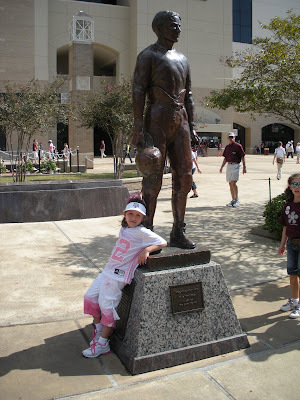 This is Taylor leaning up against the statue on the campus of E. King Gill, the original 12th Man. The 12th Man is a tradition for Texas A&M where every student stands ready to jump in for any injured players on the team so that there will always be 12 members on the team. This part of Aggie history also developed into the tradition of "if the Aggies score, everybody scores" In which when the Aggies get a touchdown (or any points really) everyone in the stands kiss their dates. It looks like she's had enough history here, right? 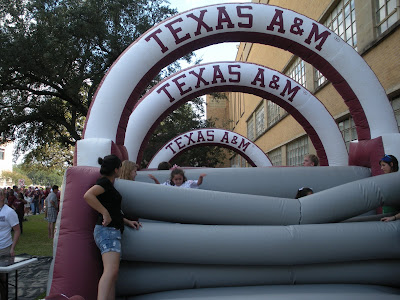 Next she got to play on a giant bounce thingy... I mean honestly - if that had been there when I was in college... well, lets just say that I might have tried it out late in the evening... after some adult beverages. You know, in those days when my judgment wasn't yet developed fully. Ok, you get the point, right? 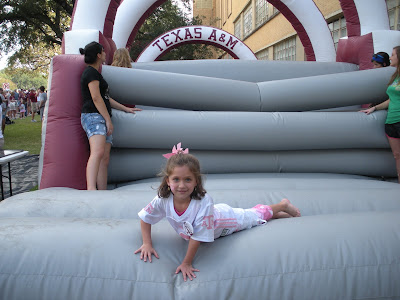 I am clearly biased...but she's pretty darn cute, isn't she folks? Still having some fun bouncing... before the next portion of the before game events. 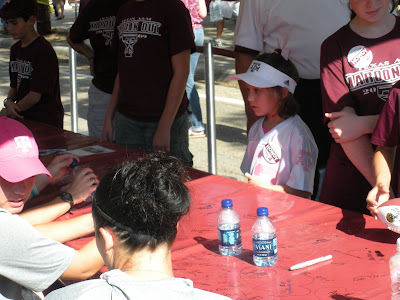 She got autographs of all of the baseball and softball players for Texas A&M. Which probably was more fun for her Uncle and Grandfather - than for her. 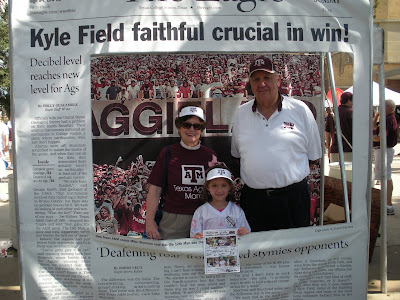 Here she is with her grandparents taking their photo in a giant cut out of a newspaper... you can't make this stuff up - but I know she had a blast. Next up, the actual football game! 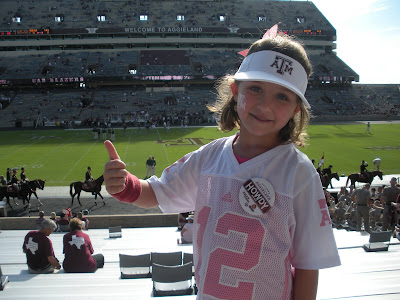 Since Texas A&M is a former military school - with one of the largest corps programs still today, outside of the actual military academies. About 1 hour before each game, they do what we call March In. Which is sort of a military review for each outfit within the corps of cadets. Often, you will find George H.W. Bush "41" in the review stands... since he comes to games frequently, and his presidential library is on the campus. There is a group called Parson's Mounted Cavalry which is the outfit that rides horses seems to be passing behind Taylor in this photo. 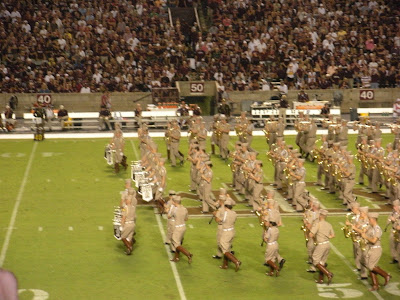 My personal favorite part of the game is halftime - where the Fightin Texas Aggie Band is on the field. I can only imagine the conversations happening at this moment... because her Uncle John was in the band for 4 years... and absolutely loved it - it truly is one of the best traditions on that campus. Her Mommy was also in the band for a short amount of time, but she didn't enjoy it like John. 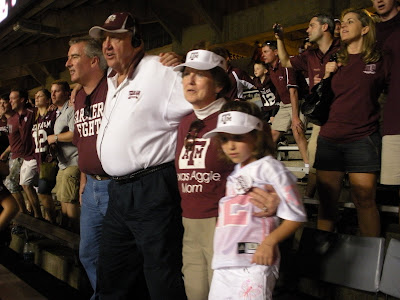 Here is Taylor with her grandparents singing the War Hymn. Too funny - she looks a little unsure of what's happening, right? HAHAHA. During the War Hymn, we sing a part of the song that says "Saw Varsity's Horns Off..." and during that time we all link legs and sway. When I say we all - I mean the whole stands... if you're close enough to reach - even if you've never met the person in your life - you link legs and sway together. 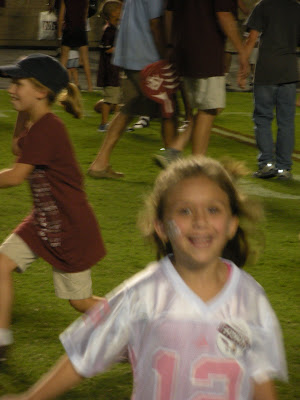 What happens when the game is over and you need to burn off some energy?? You get to run around on Kyle Field... that's what! 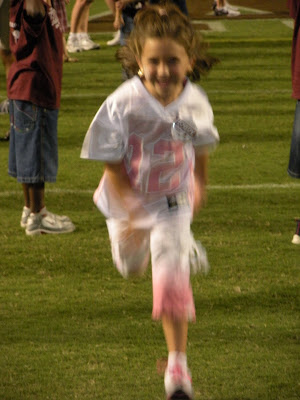 Who knew running could be so much fun?! 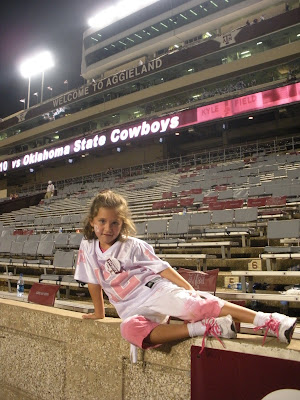 Finally, here is our little future model - striking a pose on in the stadium. I think she truly enjoys this one game trip a year... she certainly seems to get an experience that I never did... and when I was young, and got to go to Aggie games with my Dad - I loved it like nothing else in this world... but there wasn't anything there except the history, tradition, and football.

Posted by Kim H. at 2:56 PM
Email ThisBlogThis!Share to TwitterShare to FacebookShare to Pinterest
Labels: Family