I'm pretty solid on my belief system as a whole - I am honest and real about it the majority of the time - almost to a fault. It shouldn't be a secret on some issues how I feel... and I'm not about debating them because it's my right to believe my way, and it's yours to believe your way.

Most of the time beliefs are built from experience - and from our own heart desires... so depending on your  belief system on the subjects at hand - you may or may not want to skip this post entirely.

I come to you from my own perspective - that's all I have to give. I am a woman that for no real reason that I can understand - can't currently concieve a child on my own. I am 31 years old, and that is just my reality. I am a woman currently pursuing adoption... that is the foundation of where I come from on these issues. 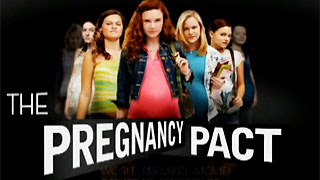 Over the weekend, a movie came on Lifetime television called The Pregnancy Pact. It was a movie about a group of girls from a small town that promise each other that they will all purposely get pregnant together. It was based on a true story, or at least a news story that was out several years ago.

I had a hard time understanding the mental state of these girls... fictional or otherwise. They seemed to have a sort of "Disneyland" view of parenthood... they literally thought that it would be fun to dress like their babies and be "like sisters." They also had no real aspirations to make something of their lives - by going to college.

Can I just be real for a second? I NEVER wanted to go to college... but I did. Want to know why? Because I knew at a very young age that I couldn't provide the life that I deserved for myself without it. Now, I certainly respect that others choose differently - but I went to college because of that mindset alone. It wasn't because I had big complicated career aspirations - I wanted to teach school (teachers who deserve MUCH more respect and salary than they get!! Can I get an amen?) - which you need a degree to do... but it wasn't like I ever wanted to be an attorney or a doctor... or a nurse.

These girls really just wanted to get married and have babies - which... hey, is all I've ever wanted too... but not at 15. It was a very sad and scary movie to watch - being someone that is about to embark on parenting a child... I wonder how you deal with those issues so that you can guide your child toward a different mindset.

Funny thing is that I posted a little something on Facebook about it yesterday - and the responses were quite surprising from some people. One interesting person that goes to my church talked about a family that lives across the street from her right now - who have a 15/16 year old daughter that has a child. They had their own daughter early, and have spent a lot of time talking about how great it is to be young and get it over with earlier in life - I've heard that before. The other thing my friend was talking about is the difficulty explaining how hard a life that is when the school system provides tutors that will come to the house while you are on maternity leave, childcare, a special bus with child seats... it's easy for them now.

I just can't believe that it's just regular every day school now with pregnant girls walking around - I mean I only graduated about 14 years ago... and that NEVER would have happened back then. (OMG - I'm OLD! I officially have an "in my day" issue to talk about now...) Girls went off to special schools to that would help them with these issues, so it wasn't in our faces like it is with today's teens. It's a very scary thing!

The other issue that came up through the Facebook discussion was a little more disturbing to me... apparently there are some folks in my life that have gone through with early pregnancies - and I applaud them for their courage on that... and for being able to find a way to make it work. Those folks sort of made me feel like I was attacking them and supporting abortion instead. Hello? Have you met me? I mean at least one of them knows very well how long I've been struggling to have a child...

I am not now - nor have I ever been a supporter of abortion... I know that people have varying reasons for supporting that issue - but for me - it is very black and white. I am not here to debate it or pursuade anyone to view it as I do... it is what it is. My opinion - and I get to make the choices for my own body - so I can only speak for knowing that the choice was long made for me on this one. Like anything else there are lots of "what ifs" that come into play... and I respect your right to consider them and have a different opinion... I really do.

I can only believe what I believe and know in my heart what I know...

Planned Parenthood actually called me to come interview with them several months ago - maybe even a year ago... they are currently about to open the largest abortion clinic in the US... can you imagine a girl going through fertility treatments working down the hall from where they would perform late term abortions?! Yeah... I couldn't either. So I never allowed them to interview me. Personal choice.

Interesting thing though, while some people are making me feel like I am supporting that movement by disagreeing with teen prenancy... other friends of mine are using my story for good... to teach their children about beliefs like mine against opening that very clinic in this area... or anywhere.

One of my coworkers this morning actually used my story in a discussion with her daughter - they were talking about that building this morning - it is just miles from our office and around the corner from where her daughter goes to school. They were talking about what will go on in that building, and some of the reasons why... and her daughter was really upset about it. So my friend turned that into a beautiful story for her daughter about all of the brave women out there that will choose NOT to go through those doors - but give a family that deserately wants a child... something to hold on to. Hope that our world can be a better place because of the few women that will choose to go a different way.

It's crazy the amount of stuff that has been in my face between that movie and this morning about teen pregnancy and abortion... it is an issue that I have a certain passion for... and a mission to help with - but then again - my poor husband knew 10 years ago that I shouldn't get started down the road of working for CPS because we'd end up having 100 children! HA!
Posted by Kim H. at 2:29 PM
Email ThisBlogThis!Share to TwitterShare to FacebookShare to Pinterest
Labels: Adoption, Infertility