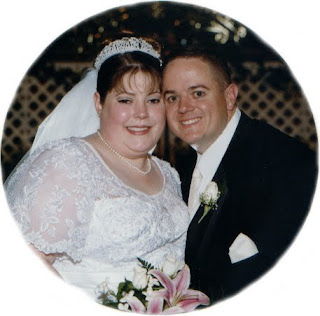 Keep in mind that we've both lost quite a bit of weight since this photo - but it's a photo from our wedding and it's still beautiful.

In honor of our 8th anniversary today - I thought I'd tell you a story that sort of relates to the last few days. Some of you may know the story of how John and I met, but some of you may not... so just humor me and let me tell the story.

When I was 18, the internet was just getting popular and America Online was all the rage... so of course I joined it to stay in touch with friends that had scattered off to various colleges. In the spring semester of my first year in college...John send me an instant message on AOL. We chatted for a while, and eventually he asked if I had a picture of myself to send to him. I sent him my favorite photo of myself, but it was from 10th grade...which made him think I was too young for him. (We have a 5 year age difference) So that abruptly ended our chatting online.

Roughly a year later, I was in an abusive relationship - and John popped back into my life via AOL again. He was seeing someone at the time, but desperately tried to help me have the courage to walk away from the relationship I was in... it didn't work, and once again we parted ways online.

Another year passed, and John popped into my life one more time. This time we were both single, and open to exploring a relationship together. It took us about a month or so before we were able to get together for our first date. Before that time came, we had both already told each other that we loved each other... sight unseen. We literally fell in love with the people we are on the inside before we ever really had seen each other. I think that is one of the most beautiful things about our relationship... of course we weren't disappointed on the physical beauty either... but that was secondary.

In so many ways, this translates to the experience we've had with the baby as well... because I literally fell in love with her sight unseen as well. I guess this is one way that I know that I have a mother's heart... because the hardest part for me to reconcile for myself is that her life will certainly be different now than it would have been with us.

I can't say that it will be worse, but it certainly will be harder. Her parents have two other young children to care for, with VERY limited means to take care of them. There certainly won't be much left over after their basic needs are met - if they can afford to meet all of those needs - for anything extra like vacations or extra curricular activities... which saddens me.

Another thing that saddens me is the fact that I had fallen in love with the birth mother, Ashlie. I was so impressed by her - and the similarities in personality that I saw between the two of us. In my mind, I was looking forward to having her be a part of our extended family and being able to become friends with her... mentor her whenever possible... and share the next 18 years of the baby's life with her - and beyond.

I reached out to our agency today, and found out that they visited Ashlie yesterday. They told her that if she changed her mind, to call them... but the birth father has moved back in and is helping her raise the children. I can only hope that he will still around for the long-term, but I know that from what I've heard there were problems in their relationship that a baby just won't solve.

Our profile is there ready to be shown to another birth mother when needed... and I'm sending a card to Ashlie to let her know that we love her and are continuing to pray for her as well as her family - that they have continued happiness and love.

For tonight, John and I will try to celebrate our anniversary by having dinner and curling up to watch a movie by our fireplace. It's certainly not how we planned on celebrating this day, but drawing strength from each other is what we need to do right now. I will be preparing to go back to work tomorrow - which still seems to be the thing that scares me the most. I guess because it is truly the last thing that will happen to move on without this baby and that just breaks my heart. One day at a time though... that's all I can ask for.
Posted by Kim H. at 2:18 PM
Email ThisBlogThis!Share to TwitterShare to FacebookShare to Pinterest
Labels: Adoption