I'm a little more coherent this evening - so I thought I'd write Tyler's birth story while it's all still fresh in my mind... or at least somewhat fresh. If you are squeamish there might be some parts to this that you'll want to skip over, but I'll do my best to keep those details to a minimum.

We started our day yesterday finishing up cleaning and packing... doing the last minute things that we hadn't gotten to over the weekend while preparing for Tyler's arrival. At about 10AM, we dropped James off at the sitter's house and headed to the hospital... I checked in at 11AM, and that's when the "fun" began. I guess all birth stories are a giant adventure - but mine of course seems like most things in my life... one crazy moment after another.

We got to our labor & delivery room around 11:30 to begin prepping for the surgery. The nurse misunderstood the doctor initially and told me that if an infection on my skin that she had noticed the week before hadn't healed... she would cancel the surgery. What she really said was that if it hadn't healed properly - she was going to do a vertical incision as opposed to the normal horizontal incision. I should have known at that point that I needed to request a different nurse, but naturally - I didn't think of that at the time.

From there she started getting all the stuff together to draw blood and get my I.V. started. She tried first in my right wrist - OUCH - even though she gave me a numbing medicine - I still almost tossed my cookies. As it turned out - my vein on that side collapsed and she couldn't use it... so then she tried the left side... same thing in that wrist. Finally, we asked the anesthesiologist to come in and get it going - which he did with zero pain. He used the numbing stuff too - but it actually worked with him doing it. Since my veins were having problems yesterday - they weren't able to get blood from my I.V. locations - so the horrible nurse started trying to find a vein to get the blood from. She searched in my arm - in the normal spot... but swore that there wasn't a place to get the blood - so then she started scoping out my feet... to which I almost panicked. There was NO way I was going to let them stick me in my foot to get blood. I forced them to call the lab and send up one of their normal technicians to get the blood... and she was able to get it on the first shot in the normal location, go figure.

After that - they did the rest of the preparations that they needed to do outside the operating room. We were slightly delayed because of the lab work being delayed - but not too much. About 10 after 1, they had me walk over to the operating room... but they wouldn't initially let John go in with me. He had to wait outside while they got my spinal block done and got everything ready for the surgery. I was terrified of the spinal block - but it was the same anesthesiologist that had gotten my I.V. inserted - and he promised that it wouldn't hurt any more than that did. I told him I was going to hunt him down like an animal if it did hurt more - but in the end... it wasn't bad at all. I honestly think it might have been easier than an epidural would have been - because there wasn't a needle left in my back or anything like that... it just felt like he gave me a shot and then everything started going numb. I rolled on my back and they got the rest of everything else set up around me.

I did have some nausea - so I ended up getting three doses of anti-nausea medicine before they started the surgery. It's very surreal being completely awake during a procedure like this - because I know I've walked into operating rooms before surgeries in the past and gotten myself positioned on the table - but from there - I remember nothing. This time - I can remember every detail. Freaky!

It seemed like they were starting the surgery before they let John come into the room... but once they let him in - I could smell burning flesh... I guess they cauterized the blood vessels as they cut, and again - just another strange sensation... but they did their thing, and this is where it gets nuts! All of a sudden - we heard this huge splash and all of the medical team yell "HOLY COW" - can I just stop here and tell you that there is nothing that will get your heart rate going like having a bunch of medical folks scream while cutting you open?! At any rate, I now hold the record for shooting amniotic fluid across the operating room. Immediately after that happened - John jumped up to see what was happening... I think we both thought that it was blood because we had been prepped that we'd hear suction when they broke my water... but nothing like that. The next thing I hear is the doctor sounding like she's panicking and she's talking about his head turning with some sort of alarmed tone to her voice. I felt a lot of tugging and struggling - but a few moments later - Tyler arrived.

There wasn't much crying, but John was able to go over and watch them get him cleaned up. He held Tyler up for me to see him and take a couple of pictures, but then they whisked them off to the nursery. The doctors finished their work on me, and then we went through the crazy experience of transferring me to the bed that I'd be using in recovery. They wheeled me over to the recovery room and I spent a little more than 2 hours in there. It's very strange to want to move your toes, but being completely unable to make it work. It took the full time for me to be able to move my knees. I had to be able to help move myself into my bed in the main hospital room before they'd let me get out of recovery.

While I was in recovery, they moved Tyler to the NICU. His lungs aren't developed enough, and he seems to be having some trouble with his respiration... so they moved him upstairs for some further assistance. On the way to my regular room - they wheeled me upstairs to visit Tyler for a few minutes, and it was completely overwhelming. There were so many tubes, wires, monitors, and everything else on my little tiny man. I broke down quite a bit while we were up in his room...

Finally, they took me down to my room (2 floors below where Tyler is) where I'll be staying for the remainder of the week. I wasn't to get up for 14 hours - so I wouldn't be able to see Tyler again until today. There was some confusion with the management of my blood sugars at this point going forward - so we had some doctor drama... but all got settled. So, I settled in and did some visiting, reading, and television watching.

This morning, the nurses got me up for the first time - which was painful, but could have been worse. I got to give myself a sponge bath of sorts and clean up a little bit. I was then considered mobile... of course - I wasn't allowed to eat anything other than clear liquids until dinner... so there is only so much energy you can muster up.

I've been up to see Tyler twice today, and have done my pumping for milk up there with him... but I'm not getting anything just yet... so they are giving him formula in the meantime. My I.V. was removed this afternoon and I'm finally free to roam around as much as I am able. When we went upstairs for my second visit with Tyler this evening - we found out that they've moved him onto his tummy... and they've got him on a "minimal stimulation" status - which means that when we visit we can't talk in the room to him or to each other and can't touch him. It's very sad to not be able to touch him or let him know that we're there... but the doctors are taking good care of him - so we'll just pray that he takes a turn for the better and is able to come home with us by Friday.

John's parents & sister are keeping James for us at our house... and brought him up to see us today. It's very surreal to have two sons and not be able to hold or snuggle with either one right now - I miss my boys! Hopefully it will all work out and we'll be one big united and happy family by the weekend... but if not, we'll just take it one day at a time and continue to trust the doctors with our precious baby boy in order to make him better in whatever time it takes to make that happen.

Keep praying for this little guy... he needs all the help he can get right now... 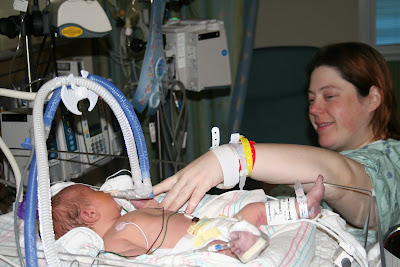 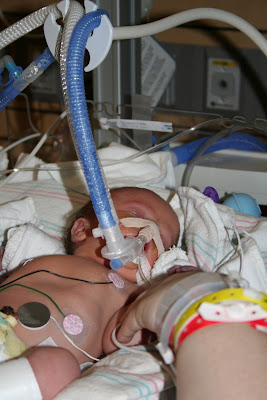 Posted by Kim H. at 7:35 PM
Email ThisBlogThis!Share to TwitterShare to FacebookShare to Pinterest
Labels: Tyler