One of those nights...

Do you remember when you were a kid and one night you woke up - sprung out of bed, and thought you were late for school on a Saturday?! That's what my night last night was like... only different.

** On a side note - don't you hate that? When someone says - oh I have one JUST like that... only it's longer, cuter, shorter... or some other major difference! Annoying! 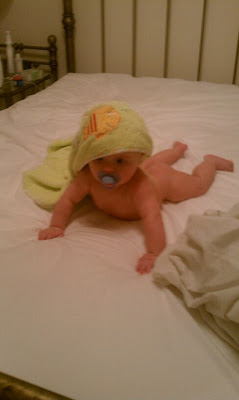 Things were rocking along fine for the most part - with the exception of a minor meltdown by James at bedtime... he went to bed on time and all was well... until about 45 minutes later when he woke up screaming! I mean bloody murder screaming - poor thing must be teething... because he couldn't possibly have bad dreams yet, could he? This little guy tends to get teeth in three's... so it could very well be the start of round 3 for us with teething.

I was able to calm him down after a couple of minutes of just holding him - he crashed back out mid fit on my shoulder. I put him back in the crib and set out to take care of Tyler again. I had him down for bed by about 8:15-8:30 and was feeling really good about myself. I relaxed for a few minutes and then got in bed myself around 9.

I must have crashed hard, because at 9:30 I woke up to hear James tossing and turning... only - I thought it was morning! Scared the snot out of me... because I literally thought it was 9:30 in the morning... never-mind the fact that it was dark outside.

We went through this several times - not the complete lack of brain - but the restless fussy tossing & turning. Then Tyler wanted to eat again at midnight - because you know... he hadn't eaten in 4 hours... and the boy wants to eat every 2! He was also waiting up for me when the alarm went off at 4:30... he was like - "Hi Momma!! Lets Eat!"

James has been eating like a horse lately too - I mean twice as much as normal... God help us when they get bigger! My third child need to be a dainty "eat like a bird" girl... or we'll be broke! 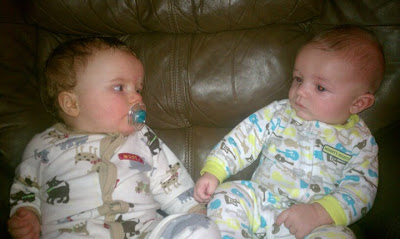 Speaking of serious amounts of food being consumed... can you believe there is a 6 month age difference between these two... and yet only a SIX pound difference in their weight?! Lordy!

Here are a couple of pictures of them when they went to spend a day at their grandparent's house with John... they make me laugh. 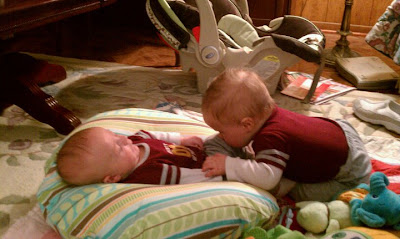 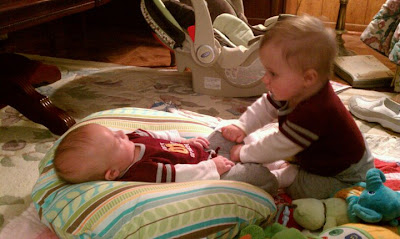 Can you just hear him... "Ty, I think we can take them... we just have to work together to break 'em" 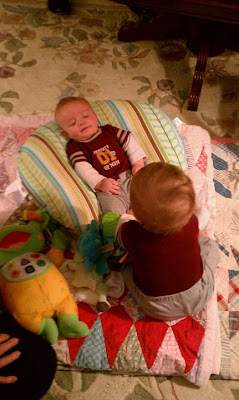 And earlier last month - we went to visit John's Dad while he was helping out John's Aunt & Uncle at their business... they had a riding dinosaur... and Mr. James had a good time! 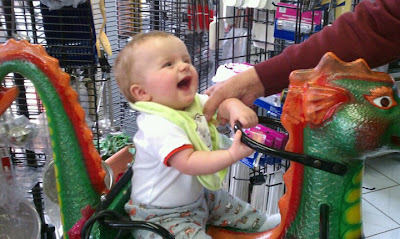 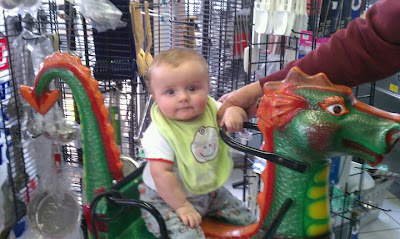 Lastly, Mr. Destructo... can flip his gym over in 2 seconds flat... so he's pretty much lost the opportunity to play with it. 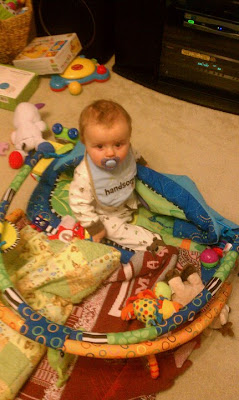 He now hangs out in his play pen with a whole bunch of toys to keep him entertained. I love that he can play and roll around - but he's safe so I can get a few things done. We also will set up his video on the shelf of the coffee table... so occasionally I will walk by, and he's got his head pressed up against the side of the play pen watching his video intensely. He just makes me laugh!
Posted by Kim H. at 2:05 PM
Email ThisBlogThis!Share to TwitterShare to FacebookShare to Pinterest
Labels: James, Mommy Diaries, Tyler