I need to start this post with a disclaimer - to those of you ladies out there that are still waiting for your miracle... I urge you to read even if you don't want to. I know you'll likely be irritated by this post, and I'm sorry. I COMPLETELY remember 100% how I used to feel when I heard some of these things, BUT I want to tell you the truth... and WHEN (because I believe that for most it's only a matter of time) you do get your miracle - I promise you'll remember this post and think... "Wow... no kidding."

After a really bad night on Tuesday (read REALLY REALLY bad), I needed to hear from some of my fellow infant Moms to see if I had completely lost it - or if I was just in need of a breather. I sent an email to 7 ladies from all over the country - Texas, Michigan, Florida, Ohio, and Nevada - and what I found was astounding to me.

Five of the ladies responded to me, and the phenomenon that I found was crazy. Out of the 8 of us ladies... 6 (SIX) found motherhood to be completely different than they thought it would be. I think I can speak for most of us in saying that when we used to hear about people struggling with their babies - we thought that they just weren't doing something right... oh how self righteous... people really, when it comes down to it... you just do what you have to do in order to keep a little sanity in this process.

I believe that 6 out of the 8 ladies struggled in some form - to varying degrees - with infertility... which I think we all had some sort of preconceived notion that since it was so difficult to actually get pregnant... and deliver a healthy baby - that we deserved some sort of pass to having an easier ride on the motherhood roller coaster, but that just isn't what we've found.

One of the other ladies really struck a cord with me though in her response because she identified something that has REALLY been bothering me a lot. She has twins, and I've got my little Irish twins... or so they've been called. The thing for us is that one of them is always crying or in need of something - so there is a whole lot of juggling between the two... and not a lot of time to enjoy the babies, hold them, snuggle with them, play with them, or just generally spend quality bonding time with them uninterrupted. Which can lead to a lot of added pressure being put on yourself to do it all better and faster so that you don't miss out on those beautiful moments.

The reality is that ALL of the ladies that responded sort of felt like the truth about motherhood was some sort of closely guarded secret that we weren't let in on prior to having our children. Not that any of us would trade our children for the world... but wow... some days this gig will bring you to your knees, and make you wish that you could hand the baby back to their mother. (only to find that you ARE their mother!)

A while ago - I posted this "schedule" of my day... and it's still similar only - add in a Tyler feeding somewhere between 2 and 3:30. But there is so much more to be said than that. My nights these days sort of resemble a war zone with me trying to side step landmines at every turn. It's funny because I remember in the days before the boys - when the work day was over... it seemed like the rest of the day was a gentle coasting into relaxation before bed... now it's an all out sprint from the moment I leave the office to get through the traffic to pick up the boys and get them fed, bathed, and played out before their bedtimes.

Right now they are both teething in some form... so the night are a little tougher than they used to be... which means that probably 80% of the time - the only thing I do for myself before bed is get a shower. (is that really for me or more for the people I encounter during the day? HA!) By that I literally mean that is the ONLY thing I do.

I skip dinner to hold one of my hurting little munchkins. I haven't actually watched and paid attention to an entire television show in a year. (Is it wrong that Tyler loves watching Bones?) I literally race to get in a shower and repack the bag while Tyler is taking a very short nap between his two nightly feedings. I still wear open toed shoes even though I haven't had a pedicure since before Tyler was born - because damn it - it's the spring. I have gotten poop on me more than I can count... and it doesn't even gross me out anymore. I've been thrown up on even more than I've been doused in poop. Sometimes the crying leads to all three of us crying together. The laundry - oh my stars - the laundry.

Children truly are blessings, but no matter how hard you've prayed for them... and believe me - I prayed for mine for 8 years... some days - you'll wonder what in the world you were thinking. Then you'll get a little sleep... see them smile at you... hear a baby giggle... and it'll all be alright again.

And just for your viewing pleasure... here are my two little men - I do love them fiercely even though some days I think they might literally either send me to the funny farm or just flat out bring me to an early death. 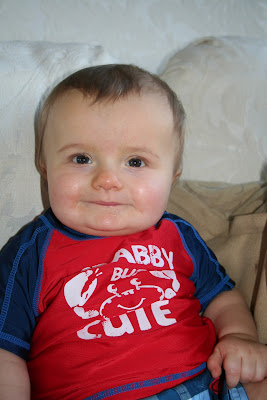 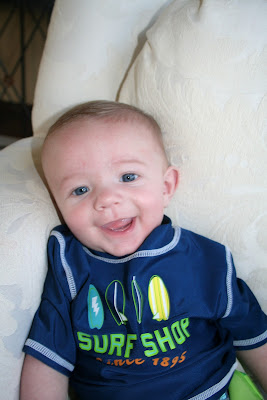 Those were taken before our first swim of the season... James' second time and Tyler's first...
Posted by Kim H. at 11:03 AM
Email ThisBlogThis!Share to TwitterShare to FacebookShare to Pinterest
Labels: Mommy Diaries