The Story of Bob 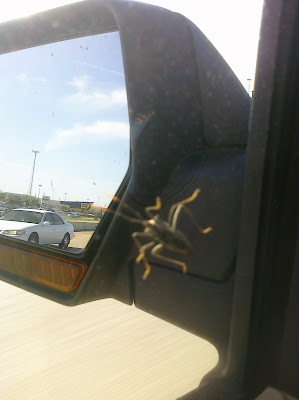 Bob decided yesterday to make a grand move from downtown Houston to the suburbs - Cypress to be exact. He hopped on with us at John's office building, and rode with us to Cypress.

He is a tough little guy because he managed to hang on to the window going 60 miles an hour on the HOV lane for 20+ miles... and through that we bonded a little bit. I sort of wondered if I picked him back up this morning if I could have driven the HOV with him as my second passenger... and if I brought his brother out with me this evening if that would count as well. (not likely since someone tried to claim a blow up doll as their second passenger and that didn't qualify)

Anyway, back to Bob.

He hung on for dear life for the trip from the city to the suburbs... and brought about this conversation and ensuing hilarity upon our arrival to Cypress.

John: "Do you want that thing to jump on you when you open the door to get the boys?"
Me: "No, but I was scared to crack the window to get him off because if he flew in the car - we'd have a serious wreck because I'd flip out."
(Bob was still on the window taunting me... and surely laughing)
John: "Well, lets try to get him off at the light."

I rolled down the window at said light... and Bob didn't budge. At least until I started rolling the window up... at which point he jumped inside the car... and caused a lot of screaming and flailing. I didn't know where he went, but then found him on my door inside the car... and of course the light turned green right as Bob jumped on to the STEERING WHEEL... and from there he proceeded to find his way over to John's side of the car. Much more screaming and lots of laughter came... and we had to pull over into the driveway of the high school in the middle of the street...

Upon opening the car door - Bob was spotted on the passenger seat, and was beaten with a spare baby bib that was in the car. We don't really know what happened to Bob after that - my happy place is that he is happily living in the area with the ducks and the pond... or reeking havoc with the high school girls there in Cy Ranch High School.

After much more laughter - bringing on tears - we continued on our way to get the boys. Just before we reached Miss Amanda's house though John caught a glimpse of a shadow and thought Bob had reappeared which spawned more laughter and more shrieking.

When we got to Amanda's - I got out to get the boys while John thoroughly inspected every inch of the car... no Bob was found... and we went on about our lives.

You just CAN'T make this stuff up!
Posted by Kim H. at 9:53 AM
Email ThisBlogThis!Share to TwitterShare to FacebookShare to Pinterest
Labels: Suburbia