Last month, just after the big move to Tennessee... my inlaws came to visit to help get the nursery set up for the boys. We had some construction and painting projects - so they came to help. John wasn't able to take the entire time off from work - so one day during their trip - we took the boys on their first trip to the zoo.

The title of this post makes me giggle - because we only saw one animal listed up there - but we didn't make it more than half way around the zoo before the little men were ready for some air conditioning and a nap. 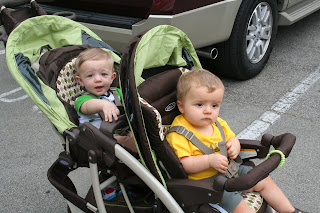 Here we are loaded up and ready to head inside - of course I bought our family a membership on the way in... so we'll be heading out to the zoo as often as possible. I may even take them back next week - just to get out of the house... depending on the weather. 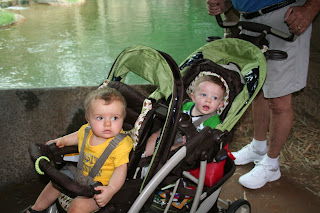 Our first stop was in the African cats exhibit... here is where we did see a tiger... and several other large menacing cats. Of course some of them were doing what cats do... sleeping... presumably because of the intense heat. The cheetas though made me nervous... they were pacing and the only thing between you and them is a little bit of water. I gotta hope that they're terrified of water or something - but those things can run at 70 MPH... and I'm thinking if they were really wanting to - they could scale the water and make it to snack on us fairly easily. (neurotic... why... yes, I am.) 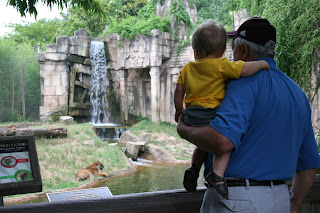 James and Paw Paw looking at the tiger from another view. He really enjoyed getting to see new things. It must be the age... but as long as there is lots of new and different stuff to look at - he's pretty happy to be out and about. Just don't expect him to sit still or be quiet! 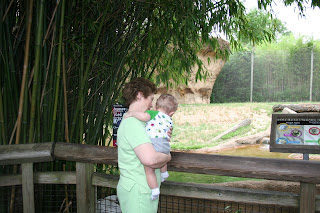 Tyler got a look at the same tiger with Maw Maw. He's much more quiet and it's hard to tell if he's paying attention or just happy to be there. Pretty much as long as he has people around him... he's happy. 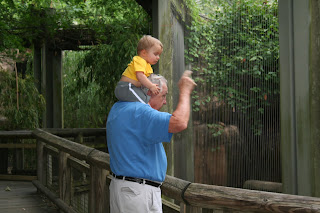 Look a panther!! How cool! Gotta love that little stinker pants. He's so funny... and growing up SO fast! Just yesterday he stood up for the first time without pulling up on anything... I'm in big trouble very soon sports fans. Thank God for my sister talking me into buying a baby corral... so I can keep them locked into the living room. Now that we're not using it for Tyler's "crib" it has been very helpful! Mom doesn't have to play as many games of "find where James is hiding" 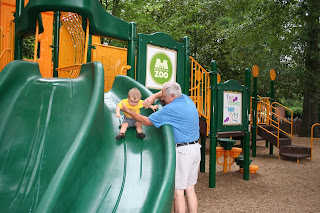 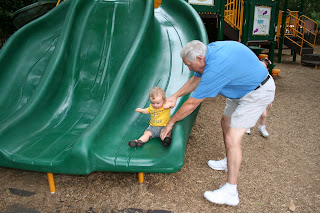 About the time we got done with our first exhibit - it started raining. In Houston this would have been miserable... but here it actually cooled things down a bit. While we were waiting to see if it was really going to rain the boys got to play on the play ground for a few minutes. This was James' first time to slide. 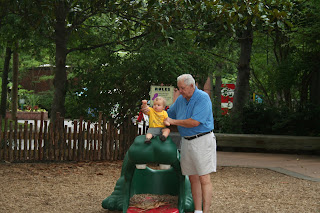 Then play on a dinosaur with Paw Paw... it's always something fun!! 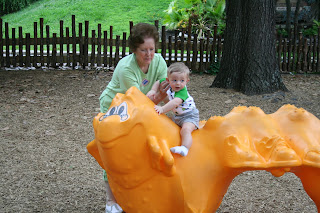 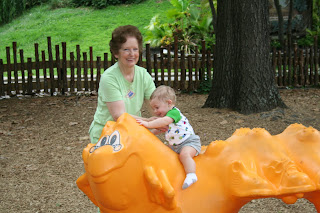 Tyler got to play on a worm... I don't think he was too sure about it at first, but then he thought it was pretty cool. 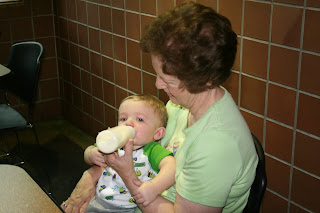 It did start raining - so we ducked inside a cafe right there next to the playground. Tyler had a bottle... and a special treat to be revealed in the next photo. 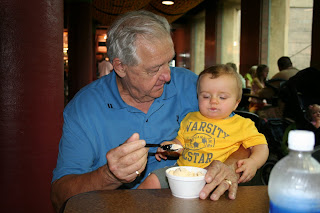 Strawberry ice cream for everyone. James shared some butter pecan with Paw Paw - all except the pecans... and also had some strawberry. I hadn't given them strawberries before this - other than James had some baby yogurt... but it went well and everyone was happy. My inlaws tease me all the time that their kids would have died... because they didn't avoid any foods or anything when they were little. I might be a tad protective, but better to be safe than sorry, right?

If you see the window over James shoulder... it's pretty cool on the other side of that window is a monkey exhibit - so they actually come up to the windows while people are sitting inside eating. Very entertaining! 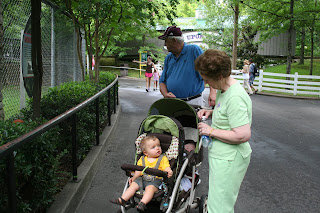 After the rain stopped - we went on with our tour of half of the zoo. We saw some elk, and the aquarium. Sadly the petting zoo was closed that day. I can't WAIT to take them to the petting zoo. I've got pictures of me at one when I was little, and I just can't imagine how much fun they'd have feeding the animals. 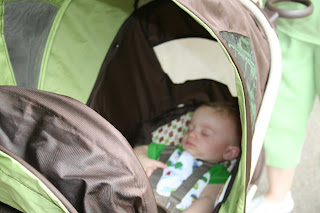 Tyler took a bit of a nap riding around in the stroller. That kid can sleep anywhere and in anything that is rolling. Shopping carts, strollers, cars, it doesn't matter... just keep him moving. 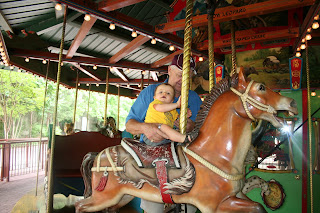 We ended our trip with a bang. Their first ride on this classic childhood favorite. They LOVED it. I stayed down on the ground to take pictures... but their faces were priceless. 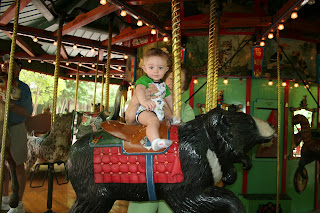 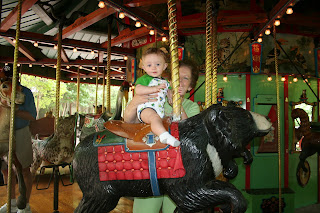 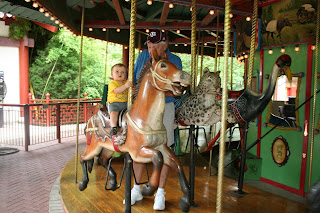 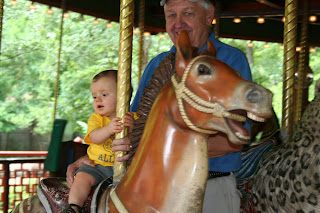 On our way out - we passed a zoo employee who told us they were feeding the gorillas at that moment - so we delayed our exit for a couple of minutes and took the boys to see this. It was interesting. I never would have guessed that a gorilla would eat corn on the cob just like us... raw, but they don't eat it whole - they scrape the kernels off with their teeth! 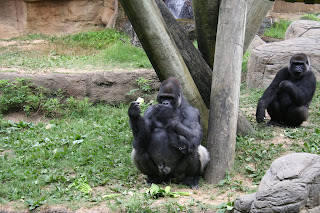 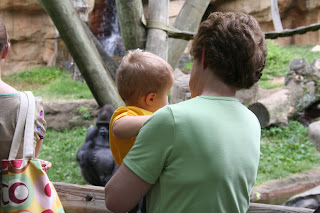 Julie the hippo was getting her afternoon meal when we passed by on our way to the exit too. She just had her 50th birthday party last weekend... or maybe two weeks ago - but either way - she looks pretty spry for 50! 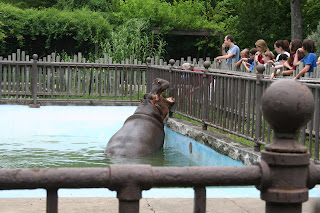 After naps and relaxing for a bit - we grilled out for dinner... and the boys enjoyed sitting on the patio watching the birds. We have TONS of birds in the back yard and got a bird feeder to go with the bird houses that the previous owners left. It's a pretty sweet setup for a bird, if you ask me. Free food and a place to nest! 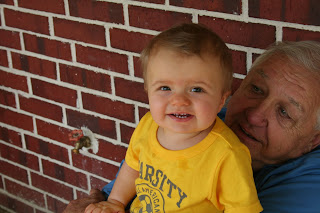 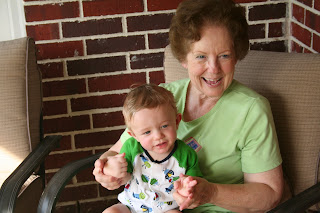 That was our first trip to the zoo. It was so much fun - I can't wait to go back. I'm sure we'll be regulars in the Fall once it cools off and all the big kids are in school... we'll have the place practically to ourselves... and what's not to love about being able to buy Starbucks inside the zoo and then stroll around for a few hours with my little monkeys?!
Posted by Kim H. at 3:15 PM
Email ThisBlogThis!Share to TwitterShare to FacebookShare to Pinterest
Labels: Family, Mommy Diaries