On Tuesday, James woke up crying... I mean in pain crying. He normally wakes up happy and giggles when you go in to get him... on this day - he just cried and put his hands over his ears. Then when I picked him up - he put his head on my shoulder and snuggled. None of this is normal for James... he is pretty independent and wants to be on the go.

My first thought was: Does he have an ear infection? Then I thought about those pesky 2 year molars that are sure to pop up at some point soon for us. I don't have anything to go on with the ear infection issue - because he has only gotten 1 in his entire life... but this just doesn't seem like it's a sick issue.

Yesterday, we went to MOPS...and this issue reared its ugly head again. I went to drop him off at his class and my baby who normally just scampers off into the room to play - without looking back - was reduced to tears. Hysterical, clawing at the lady to get to Mommy tears. I feel horrible leaving him because I knew that he just simply is hurting... but I told them to page me if he didn't settle down in about 5 minutes... they never paged me, so I let him stay. 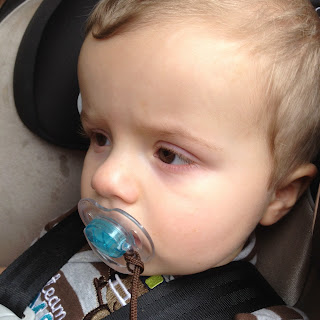 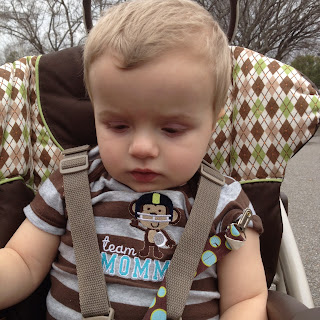 When I picked him up though, his eyes were this sad purplish red color... and I knew he was not only exhausted, but just plain done. We rushed through our Chick-fil-a lunch and then put them in bed as fast as I could. James slept for 3 hours, and I've been keeping him with Tylenol as needed. He did sleep without waking up last night - and was pretty happy and giggly when I got him out of bed this morning. No tears at the MDO drop off... so maybe he's doing better.

We have no teeth poking through - so I don't know what to think about those 2 year molars... they could still be rearing their ugly heads, but I'm just not 100% sure of what our issue is right now. If the problem is teeth - I wish they'd just come in and be done with it... so he can have this teething mess behind him.

It's interesting - I was talking with another Mom at MOPS yesterday and she has two boys as well... a drooler and a non-drooler... we have the same phenomenon going on with that. Our non-drooler seems to have more pain with teething issues (James) and our droolers seem to have plenty of water works but not as much pain. (Tyler)

What's your experience?
Posted by Kim H. at 10:01 AM
Email ThisBlogThis!Share to TwitterShare to FacebookShare to Pinterest
Labels: James