More Than We Can Bear?

This weekend, I went to Dallas for a girls weekend with my sisters. We also had a Stella & Dot and Scentsy party while I was there - or actually that was the original reason for the trip. Anyway, while I was there - my sister and I were talking about her Step-Dad, Jerry. (We have a complicated family)

Jerry has been a part of my sisters' lives as long as I have - or actually longer. (You should go look at his bio and testimony on his website) Within the last few years, he wrote a book about his life. I never knew all of these things about him before and find his story fascinating - the amount of hardships that he has overcome is nothing short of a miracle and a true testament to the saying that "If God brings you to it - he will bring you through it."

I mainly wanted to tell you guys about this book because I know a lot of you are avid readers, and Christians... and I think that Jerry's story can bless your life as much as it has/will bless mine. There is so much to his story - and we all will take something different from it. One thing that I find interesting is that he was diagnosed with the same illness that our Grandmother died from, and he has found a way to beat it - I only wish that we'd found this treatment in those years when she was fighting it too. 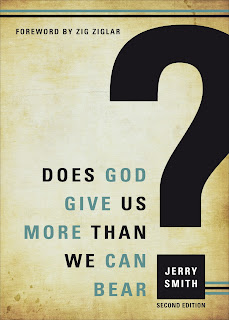 On Jerry's website - this is what they say about the book:

The child of a raped housekeeper who was deaf, mute, and poor, Jerry Smith had trouble before he even started. Does God Give Us More Than We Can Bear? takes readers through disappointments and failures as Jerry does his best to battle overwhelming odds with a deck seemingly stacked against him. Did God give Jerry more than he could bear? As an aging Jerry ponders this very question, he is diagnosed with an untreatable and terminal lung disease. With nowhere left to turn and a deadline with fate, God then reveals his plan for Jerry's life. Now, cured of his previously incurable disease but still suffering the damage caused, Jerry has been given new direction and shares with readers his struggles, stories, and wisdom. In these recollections, he reveals hope, a light for the darkest days, years, and even decades. Jerry's story is the perfect example of how God will use anything for good, even when it seems most unlikely. He now lives to share his story, the hope he has, and how the lessons he learned can change lives.

For only $10.99 - you can read about the struggle that Jerry has overcome, and what he learned in the process of dealing with each obstacle. The list is long - and I for one am amazed that he has survived it all with such grace. I know it couldn't have been easy to reconcile it all, but thankfully with God's help - we can all get through anything. Please go check out his book - I know you will not regret it!

Jerry has inspired me to start working on something for my own 2,967 day struggle to become a mother. (8 years, 1 month, and 17 days) - I would dearly love to share my story with all of you and anyone else out in the world that would be interested in reading it. If only 1 person in the world was helped by reading our story - it would make it all worth it to me. I just need to find some time to get started writing... I guess for now, a little here and there is all I can get. Maybe more when the boys are in school two days a week in the fall.
Posted by Kim H. at 12:13 PM
Email ThisBlogThis!Share to TwitterShare to FacebookShare to Pinterest
Labels: Family, Wisdom, Writing/Dreams