Here we are for our third installment of the catch up posts... 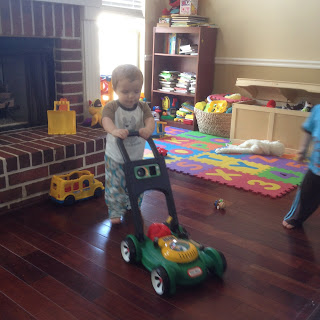 March 18, The boys were fighting over a push toy on Sunday, so Daddy put together their lawn mower. James was THRILLED. They've been pushing it around nonstop ever since. 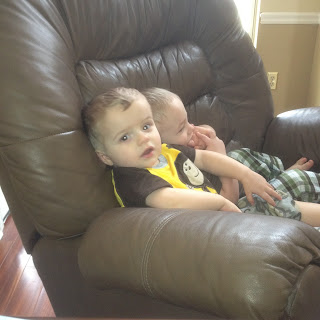 March 19, My little Monkeys having some fun in their Daddy's chair. They love climbing into the chair before we can get in it... if only we could trust them in it while we're not in the room. They just don't quite get the fact that they can't stand up in it and act crazy. 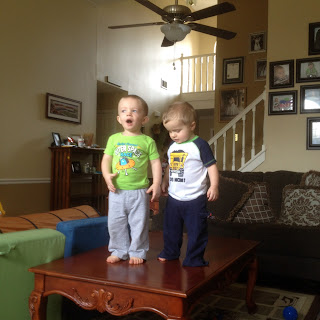 March 20, This picture makes me laugh. Such a epitome of my life these days. They shouldn't be on the coffee table, but I chose to ignore that battle for the moment... but they were on it this day having a singing dance party. 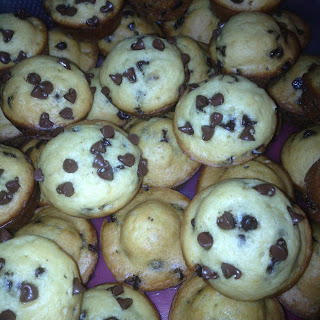 March 21, it was my small group's week to bring the breakfast for our MOPS meeting. I made these puffins (pancake muffins) they were really tasty! I wish that the maple syrup flavor would have been more pronounced, but I was pleased with them anyway. They'll be on Momma Hawk Cooks as soon as I can get caught up over there. 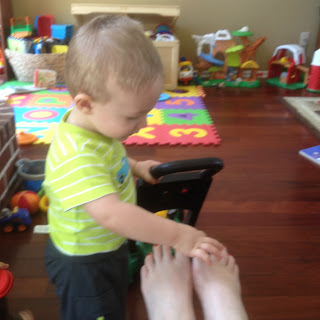 March 22, I went and got a pedicure while the boys were at school. Tyler was mesmerized by the color on my toes - he kept pressing them like they were buttons. 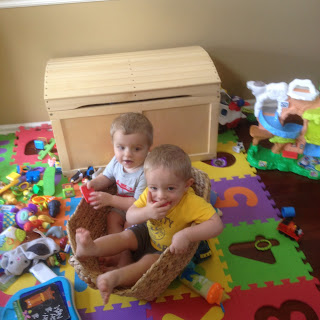 March 23, another relaxing day - we just hung around the house and played. I caught this photo of the boys sitting together in their toy basket - the story of my days... they clear the toys off of the book shelves, out of the toy box, and out of the basket... all for me to put back together while they sleep - to destroy again the next day. 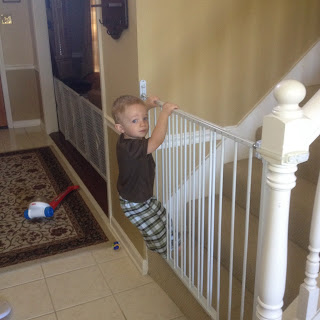 March 24, This guy... oiy! He has figured out how to climb up there and get the gate open. Luckily he hasn't fallen off of it... but geez. What am I going to do with him?!