James' Day at the Hospital

It's been a bit longer than I'd like since I was able to blog... but I'm dealing with a monster computer virus - hopefully it'll be cleared up in the next week or so though. (What a pain in the rear!)

Last week, my inlaws were here for a visit and to help out with Tyler while we dealt with James' testing. In April, we met with a geneticist for a condition that James has been diagnosed with - and set up a plan to have him set up for an MRI and a bone age scan. (The bone age scan is basically an x-ray of the left hand) 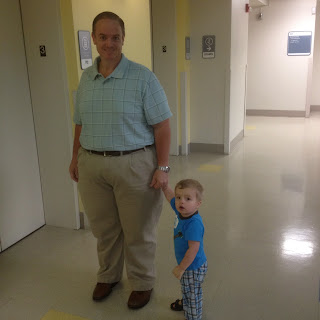 So we checked in to the hospital at 6:30 on the morning of the tests - James in his pajamas because Momma didn't want to mess with getting him dressed when we had to wake him up so early. Tyler got to stay home in bed until 8 and hang with his grandparents... 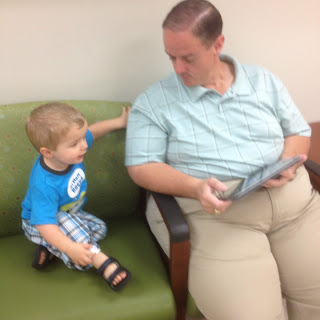 We then got his hospital bracelet, which was put on his ankle and drove him crazy until I cut it off in the car on the way home. He kept showing it to us and pulling on it. I think he got a kick out of the events of the day to this point because he was just hanging with Mom & Dad all alone. 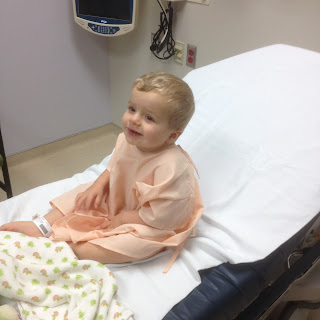 My sweet little buddy in his hospital gown... he looked so cute, so grown up, and so small - all at the same time. 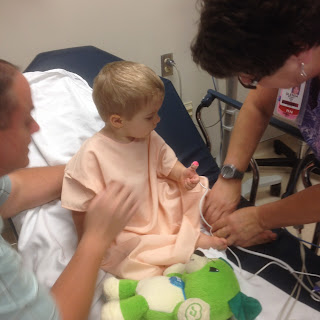 He got his vital signs taken by the nurse, and I swear if I hadn't experienced so many BAD pediatric people out there - I certainly wouldn't appreciate the people that are truly good at their jobs as much as I do. Between our new pediatrician and the folks at the Children's Hospital - I know that we're now being WELL taken care of. (There isn't much else that can make you feel better about your kids care than good quality health care providers) 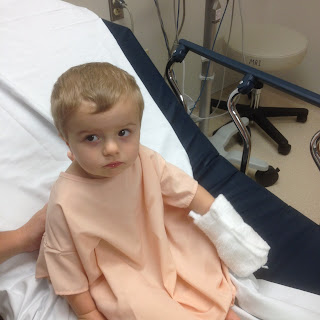 Another nurse came in to get his IV set up - to everyone's surprise... James didn't even make a peep. I wish these people could start all of my IV's in the future too! I couldn't have been more proud of by big boy - he just sat there and literally didn't even cry. Within minutes they took him back to get the testing done and sent us to a waiting room.

Apparently, he woke up faster than they thought he would because after about 45 minutes a nurse carried him to the waiting room to greet us. He was certainly groggy, but seemed to be himself. I'd heard that he could wake up angry because of the drugs, but he was alright. His normal independent self if you ask me. They redid his bone age scan before we left, gave him a Sprite and we were on our way home by about 9:00! I was so happy that it didn't drag out all day.

James is so independent, and wanted to walk to the car. He of course couldn't, but tried several times. He'd insist - so John would put him down and hold his arms... then his little legs would go all jelly... and we'd pick him up... only to start the process again a few minutes later. The car ride home was uneventful - he watched his movies and drank his Sprite. When we got home - we put him in our old walker for a bit and within an hour - he was back to normal. 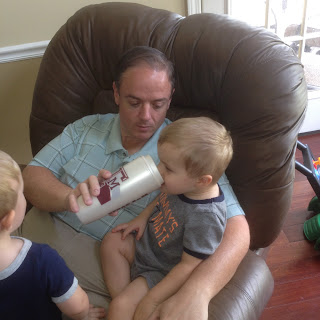 Here he is getting a drink from Daddy after getting out of the walker. Tyler was a bit jealous of the walker, but did great staying with John's parents. From the look of things - he had the run of the house for the morning - which is abnormal and I'm sure tickle him to death. 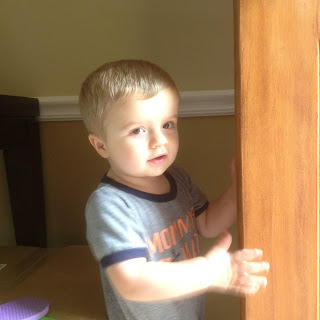 We kept things pretty low key for the day. We stayed home and only let them play in the back yard for a little bit... just wanted to make sure that James didn't overdo things too much. We're waiting for the results from the tests, but hope to hear back from the geneticist's office in the next day or so with our next steps. We don't expect them to have found anything on the MRI - it was mainly for a baseline in case something develops in the future. So, all we'll expect to hear is information about taking him on to an Ophthalmologist to get checked out and an Endocrinologist as well.

In all, I don't think the day could have gone any better. I was ready for all sorts of drama and to snuggle my baby boy for a good part of the day - but he took it all in stride and we got back to normal within only about an hour! Praise God for that!
Posted by Kim H. at 7:30 AM
Email ThisBlogThis!Share to TwitterShare to FacebookShare to Pinterest
Labels: James, Neurofibromatosis 1