Falling Off the Wagon

Well, I totally fell off the wagon on my posting daily for the month of November deal. I'm so upset with myself, but I have to be honest - I have been so sick that it just hasn't been possible. My body wouldn't allow it. It's been a constant flow of illness, and I go back to the doctor yet again tomorrow to try to get it under control.

I took the boys back to their doctor today, and we found 4 infected ears so we're trying a new antibiotic for them. 10 more days of medicines and possible diaper issues... joy. I go back tomorrow for another visit for my recurring issues, and hope that we can figure something out to get this kicked out of our house for good!

Since my posting has suffered, I thought that I'd at least some photos of the recent happenings from around our house... 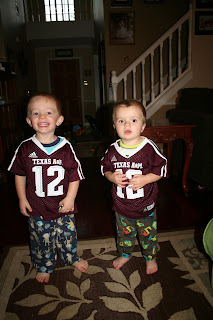 This is a photo from a couple weeks ago, but it fits for this week too. We had a great day on Saturday watching our Texas A&M Aggies beat Alabama. The boys had fun yelling with Daddy, and enjoyed watching one of the few games from the season that they were awake for the whole game. I thought the second half of the game was the best because they boys snuggled up with me to watch movies on my iPhone, and it was so sweet to just have them close to me for a nice calm period of time. I watched the game while they were happy with their movies. 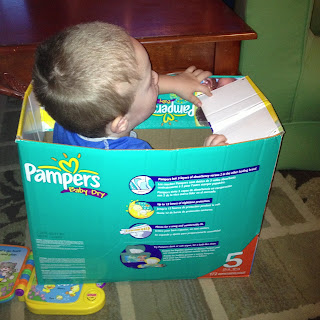 I'm not sure why, but this weekend - the boys decided that playing in old boxes was more fun than any of our toys. So they have played in them for the last few days. Thousands of dollars worth of toys and they'd rather play in a box. I guess we will have a long future of decorating boxes like cars and other items as their creativity develops. I can't wait for those days!! 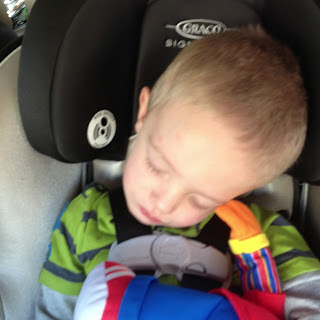 I made a major mistake on Monday, and we showed up for what we thought was our doctor's appointment... a day early... so on the way back from the pediatrician's office Tyler fell asleep. Any Mom out there knows about the dreaded "car nap" -- we fell victim to that yet again, and thus naps were a bit of a nightmare for us yesterday. 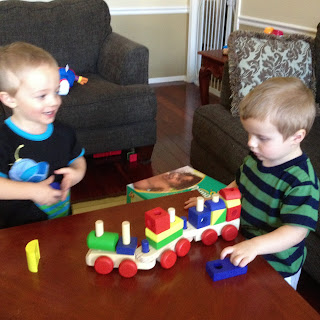 We are still slowly opening the new toys that the boys got for Tyler's Birthday. Yesterday was a stacking train, they loved it -- both were screaming "choo choo" and having a ball with it. It was pretty cute, but didn't last long... because it was in the end, no match for the boxes. 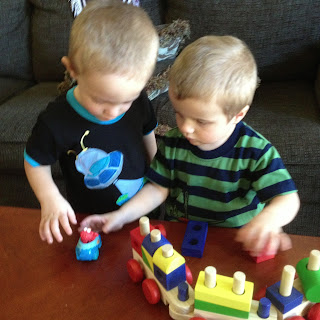 I try to capture as many moments of the playing together as humanly possible because it's such a rare occurrence in toddler land -- so here is just another photo of them playing with the train and their little Sesame Street character cars. 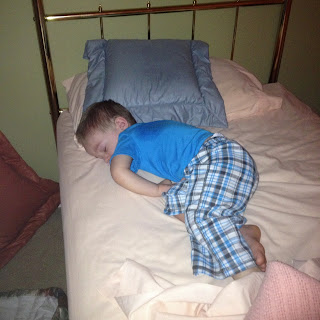 This happened this morning, Tyler climbed out of his crib and got into one of the twin beds in his room. We've been having some sleep struggles with Tyler lately because of him being sick, but also just in general he has been having a tough time. A couple of weeks ago, he figured out how to get out of his crib -- so we've bought him a toddler bed, and need to move it into his room. All of our illnesses has slowed that process down considerably, but it's clear that this boy is ready to move to another bed. He looks so sweet here, and I honestly was glad to see him sleeping because his stuffy nose has kept that from being as routine as it needs to be.

I'll leave you with another bit of information on my Scentsy business -- I've got two fundraiser's happening this month -- one for the Southern States Rottweiler Rescue (SSRR) and the other for American Foundation for Suicide Prevention (AFSP) -- I will be donating 20% of all sales from these parties to their respective organizations. I would be honored if you'd help me by getting your holiday shopping started while supporting two great organizations... Just click on my website: https://khawkins.scentsy.us and then click of the party of your choice. There are two awesome BOGO deals going on with Scentsy right now too to help you get more for your money -- our Scentsy Buddies are 2 for $25 (scented stuffed animals) and our Fragrance Foams are 2 for $6 (scented hand sanitizer).
Posted by Kim H. at 7:00 AM
Email ThisBlogThis!Share to TwitterShare to FacebookShare to Pinterest
Labels: James, Scentsy, Tyler