Right now, I'm the only girl in the house -- except for the dog & cat... and it's quite apparent. There is now slowing down to color or much of anything else - it's constant movement around here folks. We've got cars, trucks, and the like all over the place -- along with two little men that are starting to enjoy making siren sounds with their mouths.

Santa brought the boys a few different sports related things this year, but the biggest hit off all has been the set that they got with a soccer ball, a basketball, and a football. It's interesting how Tyler has taken to the basketball, and loves it... while James is obsessed with his soccer ball. It's in his bed with him while he sleeps -- it's in the room at all times, and even has become a game just before naps/bed time.

They love kicking the soccer ball around with their Daddy. It's so cute, and James can even run along and kick it while he's going - which seems pretty good to me, but I don't have much else to compare it to. Other than Tyler throwing the basketball, which I swear he does with the arch that it would take to make a basket. Are boys born with these sorts of talents? 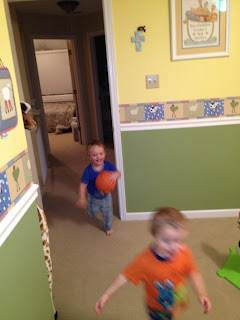 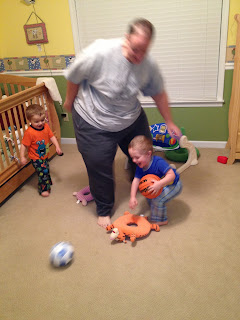 Here they are before bed time last night playing upstairs... such silly guys! Tyler ends up being in the way a lot, and falling down while trying to capture the ball... I predict a lot of broken windows and trips to the ER with these crazies! 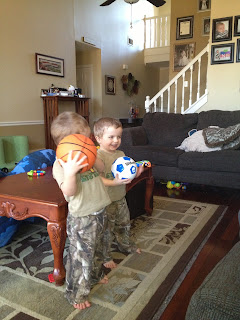 Here they are playing catch before naps yesterday, and you can see how they prefer different sports -- they can both catch the ball now, and are pretty good at throwing as well. 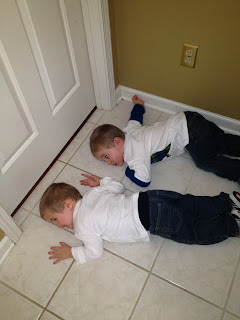 They also routinely lay on the floor when someone is behind a closed door trying to figure out what is going on in the room they are blocked from. Most of the time it's our bedroom -- and one of us is getting dressed or plugging in our phones... but they want to be in there causing mischief wherever they can.

These crazy boys sure do make my life interesting. I wouldn't trade them for the world... I just might need a bit more Tylenol over the years than I expected. HA!
Posted by Kim H. at 3:07 PM
Email ThisBlogThis!Share to TwitterShare to FacebookShare to Pinterest
Labels: James, Tyler