I'm still trying to catch my stride with this, and after taking my family with me to the grocery store - I am now more convinced of three things:

1) I will do my best to always shop alone in the future!
2) The grocery store can be overwhelming for a person trying to change some serious lifelong eating habits.
3) My family is definitely hooked on these bad choices, and it will take some time to get them out of our house for good.

That last one, I'm fine with because I didn't set out for this to be an over night process. I think every change is a change in the right direction and good for us. I chose my battles today, and let most of the things my husband threw in the cart go because I'd rather not fight about it and just gradually show him a healthier way of eating by making the changes with our meals.

I'm trying to make more fresh meals with vegetables added in right now, and this week we're having - stuffed bell peppers, chicken & vegetable stir fry, taco salads, spinach lasagna roll ups, and marinated pork chops with roasted veggies. I'm pretty happy with that right now because one thing that I can say is that I was much more intentional with my planning of meals.

What has been happening in the past has been a bad combination of trying to throw it together at the last minute, and it being after a meal -- so the combo of me being full while it being late at night -- I really haven't cared what was on the meal plan lately - it was more about getting it done so I could go to bed. This week was different - I wasn't exhausted, and I looked around at several sites while choosing our menu. The meals on this plan are things that are familiar, but might be tweaked in a small way... some won't be tweaked, but it's all a learning process.

I said that the grocery store can be overwhelming... and I'm not kidding. When you think about changing habits - it's not easy to make that work if you aren't constantly vigilant with your choices. Reading labels isn't easy when you have two toddlers with you... so that's a lesson learned that for the time being they can't be a part of these trips. More so for the fact that they aren't patient than anything else -- and momma needs some time to figure out what the best choices are for our family.

I did try some new things this week - I found some new chicken nuggets for the boys to try - they probably aren't perfectly clean (well, I know they aren't because they were processed in some way) -- but they are better than the ones we were getting for them. Until I can get on top of this and make my own -- I feel better about giving them this because it's real pieces of chicken instead of a pressed product. 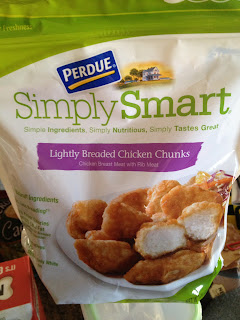 I hope that they will eat them and not notice the difference, but Tyler is so reluctant to try anything different. 99% of the time he enjoys it, but it's a HUGE fight to get him to try things. I wonder if he just doesn't trust us or if it's a phase of some sort. He will even pick out veggies if we try to hide them on his fork, whereas James hasn't met a veggie or fruit he didn't like for the most part. I made them a meal last week with a spinach & alfredo sauce on pasta and chicken... James ate it without any problem while Tyler picked all the spinach off of every bite before he'd eat it.

Any one out there with good toddler friendly clean recipes -- let me know! I'm going to keep trying. Most of the time they eat before John and I do -- so convenience foods were a lot of their diet, with a fruit & vegetable at every meal. I'm transitioning them as much as I can to eating the same meal that John and I are - even if it's as leftovers the next day.

I wish I could make them healthy paninis and things like that, but James doesn't really like bread  which makes sandwiches problematic. Any help with meals that have worked for your family would be awesome - send them my way!
Posted by Kim H. at 3:18 PM
Email ThisBlogThis!Share to TwitterShare to FacebookShare to Pinterest
Labels: Clean Eating