Yesterday was haircut day!! My shaggy boys look neat and handsome again -- okay, they're always handsome, but now they look older and more put together. It's always an adventure because we do it ourselves... or well, John does it. I try to manage the rest of the chaos in the garage. 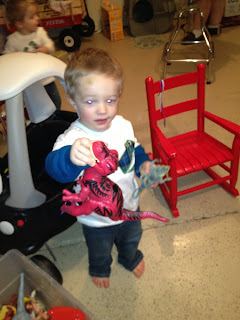 Tyler found a box of hand-me-down dinosaurs from my brother, and loved them. I'm hoping they can stay in the garage for a while before being moved into the house. 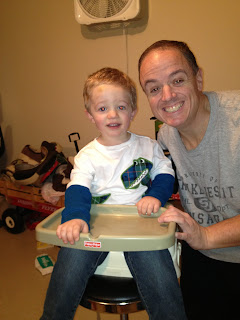 Tyler was first up in the salon, but was not as sure about the situation as his Daddy. Hilarious, I ended up having to feed him Skittles to get the job done. 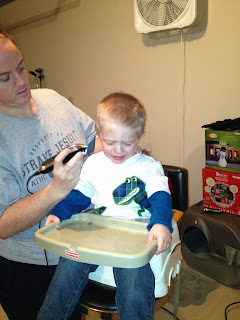 See the unhappy face on the toddler? We must have been in between Skittles. He did survive and get to play while James got his hair done. 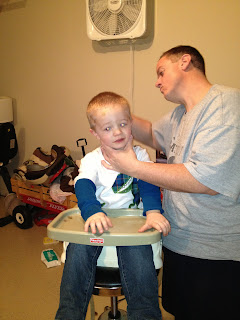 Here he is just about finished -- looking so much lighter and older. Why do haircuts on boys make them look so much older? 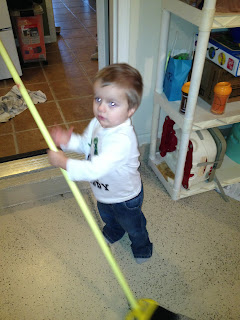 James entertained himself in the meantime by watching the clothes in the dryer spin around, and by sweeping. The boys both took turns sweeping and using the dustpan after seeing me cleaning up around the litter box and getting some stray leaves that were around the garage. They are big into helping these days! 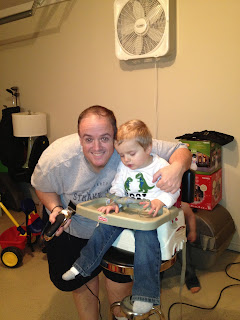 James is like, "Whatever Dad, lets just get this overwith, k?" He is getting to the point that haircuts don't bother him as much, at least until the end with the last set of clippers that John uses. They seem to tickle him, so he doesn't know whether to scream or laugh. HA! 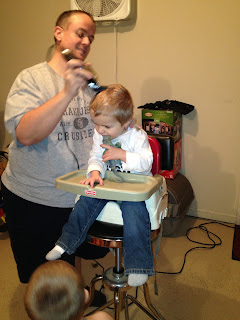 He had his trusty haircut companion of a rubber lizard found in the dinosaur box, whenever he got nervous or wanted to laugh -- he just bit down on the lizard. 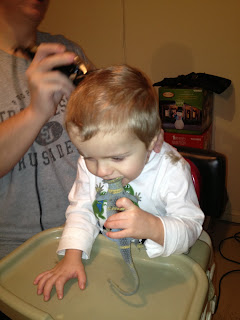 Here we are chomping on the lizard's head... nice. I do NOT look forward to the days of toy snakes & lizards -- because I already know it'll be a constant battle of finding them hidden to scare me... from not just the people under the age of 18... 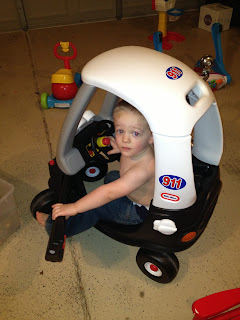 Tyler is waiting for James it be finished so they can hit the showers... he looks kinda unsure about this car, but that's more than likely because James claims 100% ownership of it when he is available to use it. 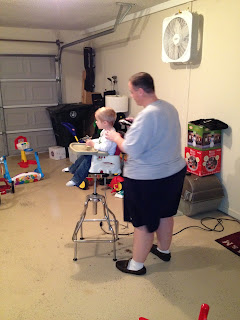 Just about finished, and ready to go get a bath to clean all the hair off of everyone. James was relieved to be finished and to get some Skittles too. 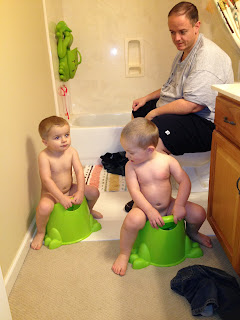 A quick pit stop before hitting the bath, who would have ever thought that I'd have two crazy boys? This of course means two froggy potties and a froggy bath toy holder. For some unknown reason they insist on sitting on the potty backwards -- I think they said something about doing that at school so maybe that is where it comes from, but it makes me laugh.
Posted by Kim H. at 3:22 PM
Email ThisBlogThis!Share to TwitterShare to FacebookShare to Pinterest
Labels: James, Tyler