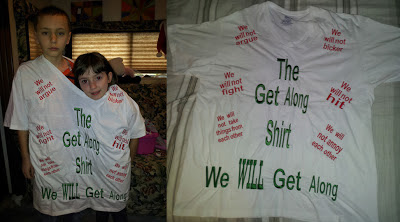 This shirt is awesome in so many ways - I think it's a great idea. As a youngest child, who was actually raised as an only child and then became the middle child in her 20's -- long detailed story, but even thought I have two older sisters (and now a younger brother & sister) -- we never really lived together that I remember. So there weren't any of these sibling parent tricks being used with me... but I can see how they will be necessary in our future.

At almost 2.5 & 3... we have already seen signs of things to come - toys being stolen by a brother and thrown out of reach of the other brother. Biting. Hitting. Fighting. You know it, and I know it's coming. It's part of growing up and having someone that is so close to you -- I can only imagine that it's worse the closer they are. So I will probably order several of these from my friend, Annie, in the future. I just can't for the life of me figure out the size you'd order.

Anyway, that wasn't the purpose of this post. I wanted to talk about the differences in parenting between husbands and wives. I think we are fundamentally as people drawn to the parent of the opposite gender, there is a powerful relationship between fathers & daughters and mothers & sons... it almost goes without understanding.

I know for me as a child growing up - I always looked for my Dad's approval more so than my Mom's -- not in a bad way, but just somewhere in my genetic make up - it seemed more satisfying. My Mom by nature was more of a disciplinarian with me, and I think there is something to that.

I've noticed now that I'm a mother, I can get angry and discipline my boys... but it is very different than the way that John does it. I don't know if he is actually tougher on them than I am, but it certainly gets under my skin from time to time. I have to sometimes hold my tongue and fight really hard to not intervene because I want to protect the boys.

Not that John is an ogre or anything like that -- it just is something within me that wants to protect like a Momma Bear when someone else is fussing at them. I don't know if the same would be true if we had girls, part of me thinks that it might be -- or maybe the tables would be turned and he'd be on the defensive if I were disciplining our daughter...

I can't be sure either way because for now we only have boys, but what an interesting phenomenon I've noticed within myself.

I think this applies to every form of punishment that you choose for your family -- maybe it's more of an issue of one parent takes the lead and one is a little more lenient?

What do you think? Do you have both boys and girls -- and find that this theory holds true?
Posted by Kim H. at 12:22 PM
Email ThisBlogThis!Share to TwitterShare to FacebookShare to Pinterest
Labels: Mommy Diaries