We had an adventure spanning about 1,600 miles over the course of 11 days... so to say that the kids and the parents are exhausted would be an understatement. Our adventure began leaving our home in Tennessee and heading to Texas... we stopped off at my inlaws to sleep before heading over to my Mom's in Austin for the weekend.

I always intend to take more pictures -- but in actuality I ended up with about 600 photos from the 10 days -- it's just hard to capture all of the great moments when your subjects are moving around like a couple of hummingbirds. 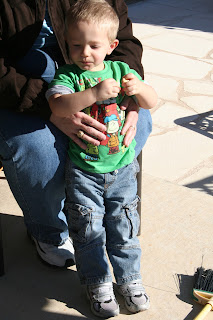 Tyler took a nap in the car between my inlaws' house and my Mom's... so he didn't need a nap once we arrived. James on the other hand did, so we took Tyler outside to play for a bit while John put James to sleep. We played with bubbles and looked around my Mom's yard. She has lots of things they can get into - like a hot tub. So I spent a good part of the time explaining how it's cold, and we can't just jump in the water. 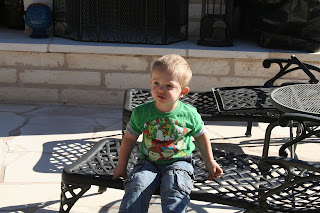 She has a great fireplace and patio outside as well, so Tyler made himself at home in one of her lounge chairs. 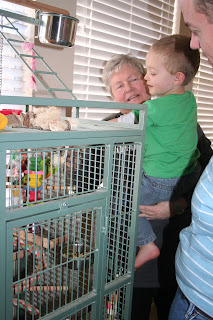 He was intrigued by my Mom's bird, Sammy... so we introduced him. I'm not sure this was a great idea - because we spent a good part of the rest of the weekend trying to keep his fingers out of the cage. 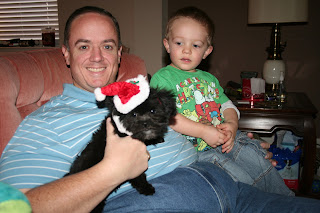 My Mom's roommate has a new puppy, Sassy -- the boys were terrified of her at first, but came around a bit by the time we left. They've never really been around a dog younger than ours (she is almost 14), so they weren't sure what to do with something that wanted to jump around on them. I was amazed because they are fairly rough on our animals - so I was scared they'd beat up the puppy. 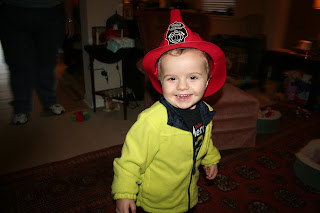 My Mom got the boys both a fireman's hat that has a siren on it. They thought they were GREAT, and instantly figured out how to turn the siren on... notsomuch with turning it back off. James got a pair of house shoes too, and he was all set. I'm not sure he was interested in much after that. 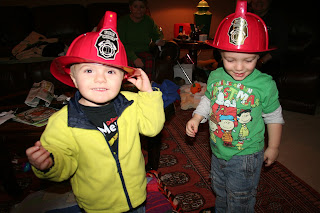 Both of the boys in their dueling siren hats. They haven't driven me crazy just yet - because there were so many things given to them over the course of the time we were in Texas. I'm sure once things start settling back in and they get over the "newness" of all their toys -- those things will be making me nuts again. 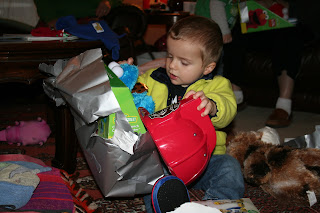 The boys also got one of the LOL Elmo dolls, and a Cookie Monster that you feed cookies to. I suggested the Elmo to my Mom for Tyler because he loves that red monster, and they have two Tickle Me Elmo dolls. The Cookie Monster stole the show though, James really took to it -- he sat and put cookies into his mouth for a good while.

I'm so uptight - I was on a constant mission to keep up with all our toys and their pieces... which is hard! We did manage to make it home with all our toys -- a few articles of clothing will have to be mailed to us, but we got the things that the boys cared about most. 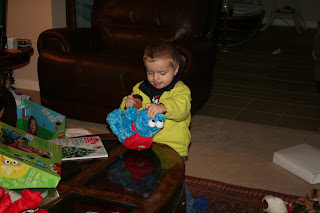 Like I said, he played with Cookie Monster for a good long while! It was so cute, but they don't quite get that Cookie Monster will open his mouth on his own - they just yank the head back and stuff the cookie in his mouth. 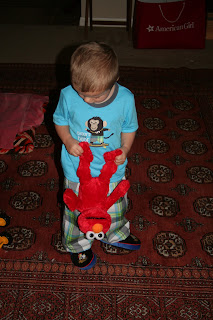 This is the Elmo -- they haven't quite figured this out, and kept banging him on the table. We will have to work on it as things settle down. 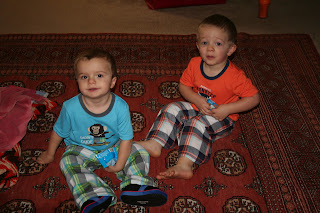 My Grandmother bought the boys both a new 3 piece PJ set -- and I just think they are super cute. I adore them in plaid, and we spend a lot of days in our PJs around here -- so we can always use more as things wear out. Not to mention, James has been hovering between sizes - so we don't have a huge selection of them in 2T. 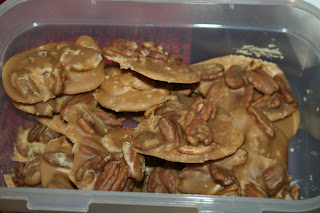 My Mom made these Microwave Pecan Pralines -- they are SO good. I fully intend on making these a regular staple in our house. I also made a cake that my Mom has loved since she was a kid, but I'll save a mention of that for when I get it on Momma Hawk Cooks. I'm going to try to be better about putting things up over there as I get them made, but no promises of how regular those posts might be. I've got a few holiday favorites from the trip to post, but from there -- it'll just depend on my cooking adventures. 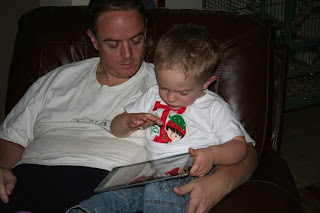 Tyler is completely addicted to playing with our iPad or my iPhone. He started out with my phone, but now prefers the iPad. I know the size is better for doing his puzzles... but he's a maniac with the toddler puzzles - he can finish them in record time. I think it has helped teach him his alphabet, but we've got to work on reading left to right. One of his puzzles flashes the animal's name on the screen spelled out when you finish putting the animal together... he always pushes the letters backwards. 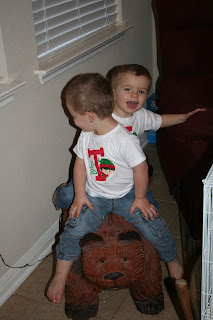 My last photo is of the boys riding a giant carved bear. My Mom loves black bears and has a large collection of them, this is a wood carving that is likely from around my Grandmother's vacation house in New Mexico.

We had a great visit with Nana and Berkeley... we hope that they might be able to visit us in Memphis sometime in 2013. I'd love to take them to Memphis in May - the big BBQ contest here in town. I know my Mom would love it. Apple 4th Gen iPad With Retina Wi-Fi 32GB For Verizon - MD523LL/A (Google Affiliate Ad)
Posted by Kim H. at 7:00 AM
Email ThisBlogThis!Share to TwitterShare to FacebookShare to Pinterest
Labels: Family, Holidays, James, Tyler