So, Basically I Had A Stroke

Let me set the picture for you...

Last Thursday night, we had just put the boys down for bed at about 7:30 and I came downstairs feeling a little light-headed. Otherwise, I felt totally normal. We had dinner around 8:00, and soon after things got strange. I stopped being able to properly communicate or get sentences out correctly. Everything was fine in my head, but the words were coming out jumbled or completely different. John noticed the problem and talked about calling an ambulance, but I got him to wait a few minutes. I asked for some advice from some nurses that I know, and decided that I should go get checked out at the hospital.

Here is an example of what happened with my speech & writing -- most that know me knew there was a problem when seeing this because I'm almost always clear with my writing. 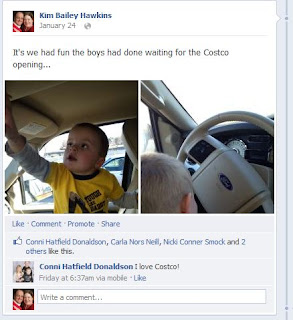 A friend from my MOPS group came and took me to the emergency room. While being examined, they noticed that my eyes were twitching -- while I was following the doctor's finger with my eyes -- it was happening, but I never knew it. They did a CT scan & an EKG, and there weren't any brain bleeds -- so that was good news, but they admitted me for further testing the next morning.

I had a MRI/MRA and a electrocardiogram done on Friday morning... as well as being seen by speech therapy and physical therapy. The tests revealed that I have some abnormally small blood vessels in my brain, they appear to be all different sizes instead of being consistent. They didn't see any clear signs of why this happened -- so I was diagnosed as having a TIA. It could have been because of an abnormal migraine according to the neurologist, but I wasn't having a headache at the time -- so I guess we won't ever know exactly.

She is sending the tests out for further testing to make sure that there aren't some other tests that need to be ordered to check out why my vessels are smaller. I'll follow up with the doctor in about 3 weeks, and will have my other doctors check out my blood sugar medicines and my blood pressure medication as well. I just want to make sure everything is monitored closely.

In reality we don't have a whole lot of answers as to why this happened, but it certainly has scared us. What if this had happened while I was home alone with the boys?! That is the most terrifying thing to me, but of course I'm the only mother that my boys have... so it has convinced me even more that it's time to make some serious changes for my health and for our family.

I'm a little nervous about being alone with the boys, but I know that John is monitoring things too - and has done an amazing job this weekend picking up where I had to leave things. The boys did well -- or at least as well as they could, and they even got a dinner date out with Daddy.
Posted by Kim H. at 10:45 AM
Email ThisBlogThis!Share to TwitterShare to FacebookShare to Pinterest
Labels: MoyaMoya