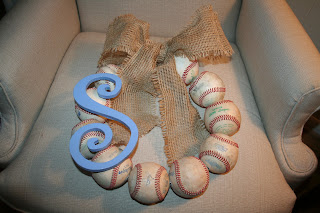 I made this wreath for my new nephew's room & baby shower. Sadly, we weren't able to have the shower because my sister was in the hospital with the flu... but I was able to attend her second shower and give her this for his room.

My brother-in-law played baseball through college and was on the Olympic team... so it's no surprise to us that when they found out they'd be having a boy -- the nursery came with a vintage baseball theme. I set out on Pinterest to find some projects, and I'm amazed that the ones I loved the most have actually all made an appearance in sweet baby Sam's nursery! There will be a follow up to this post with pictures from the shower because it was INCREDIBLE!

This truly is the easiest wreath ever to assemble - the hardest part was finding the baseballs. I happened to know a friend who is married to an umpire so that saved me from buying new baseballs and having to rough them up for that vintage look.

You can use a wire hanger to do this project, much like the ornament wreaths that were all the rage a year or so ago. I actually made one of those as well, but did it with a thicker wire that we bought at Lowe's. It made for a more sturdy project that I could make a little larger if I wanted to.

So we took 11 baseballs and my husband drilled out the center of them for me. (I'm not allowed to use power tools... for safety reasons, HAHAHA) We made sure that when drilled and strung on the wire -- all the lacing would lay in the same direction so that our OCD wouldn't go crazy. I didn't get a picture with everything lined up correctly though. 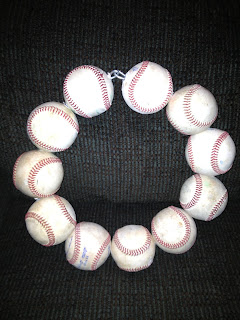 We pulled the wire into two loops and enclosed them. I think this may have taken a total of 30 minutes -- the longest part of the project was the multiple coats of paint and sealer on the "S". A friend gave me the idea later of running sandpaper over the initial to make it look a little more worn and vintage too, but I'd already sealed it.

I didn't attach the "S" to the wreath because I thought they might want to use it somewhere else in Sam's room, but we tied the burlap bow on the project and it was done!

I can think of so many other items that we could do a project like this with -- if my boys don't end up being baseball fans -- we might have to do small footballs or something else for their room!

The final product here made me so proud, and the parents to be loved it!
Posted by Kim H. at 10:17 AM
Email ThisBlogThis!Share to TwitterShare to FacebookShare to Pinterest
Labels: Craftiness