The Miracle of Samuel

I want to share the miracle of my nephew, Samuel's birth story. It is truly a testament of faith and if it inspires just one family to step out in faith -- it is worth every word written here.

My sister and her family has been through an amazing journey, and I am blessed to have been a small part of it. I love the four of them with all my heart, and I hope sharing this story blesses everyone that might see it in the future. 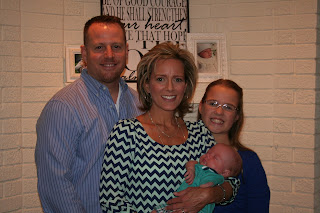 2002: My sister, Cindy, and her husband (Robert) had a beautiful daughter, Taylor.

2003: Cindy was diagnosed with Auto-Immune Hepatitis and was told that she shouldn't have anymore children because of her condition. We choose not to focus on that diagnosis because God is bigger than any of that, but I just tell you for a frame of reference. Her story with all she went through with this is a big testament to the healing power of God, and not settling with what the doctor's told her to do. She has an amazing story with finding an alternative treatment plan with a doctor in Germany.

2004-2009: They desired for more children, but prevented them out of fear for Cindy's body.

January 2010: The Lord pressed upon Cindy and Robert to step out in faith and try for another baby.

2011: They believed and even stepped out by moving Taylor to a different bedroom to open up the room that would become the nursery.

January 2012: Doctor's tell Cindy and Robert that they can't get pregnant because Cindy is not ovulating and she has developed a large cyst in her ovary.

April 2012: Some of the elders of their church took Robert to breakfast to talk about focusing on Cindy's wholeness instead of healing or getting pregnant.

September 2012: Doctor's tell them that it isn't possible to get pregnant because of the cyst and because Cindy hasn't been ovulating for many months or possibly a year. (Sounds a lot like a doctor's report I got before we got pregnant too!)

At a sabbatical, Robert took the book "Crying Out" by Bill Gothard, and that's just what they did.

During a prayer meeting at their church, Steve, asked for those that would believe for children even if Doctor's say it isn't possible.

October 7, 2012: At a Sunday prayer meeting, The Lord told Robert to sit down and read 1 Samuel Chapter 1. While reading, God told him "because you have cried out, and believed like Hannah - you will have a son."

October 9, 2012: The same week of Taylor's birthday, a baby was conceived.

December 23, 2012: Cindy went to the doctor because she had gained some weight and thought it was a complication of the cyst. It wasn't because of the cyst at all -- it was because she was pregnant!

January 1, 2013: Robert took his mom to lunch to tell her about the baby, and her first words were "I hope you call him, Samuel" - she had no idea of the previous mention from God about reading 1 Samuel.

January - March 2013: Every doctor they visited told them they should terminate the pregnancy because of Cindy's health - that she could lose her life. They shared their story of faith with all of the doctors and ministered to them, eventually the doctors came on board with being a part of the miracle.

During this time -- Cindy was in the hospital for 40 days...

April 2013: The doctor's plan for when Samuel was born included:
-- Cindy would lose a ton of blood and would need a lot of transfusions
-- Her platelets would be too low so she would need a transfusion of those as well
-- Cindy would be in the ICU for at least a week because her liver would take a big hit and might not recover, thus needing a transplant

May 14, 2013: Cindy's water broke at home. They tried to stop the contractions, but Sam's heart rate dropped below 80. They did an emergency C-section. They pulled him out, but he wasn't breathing - the doctors were able to get his breathing started. He was 30 weeks, and weighed 3 pounds.

May 17, 2013: Cindy only needed a small amount of blood right after her surgery. Her liver function went back to normal. The doctors were amazed with the whole thing and said that it would likely show up in the medical books, but she was released from the ICU after only 3 days!

Here is a video that was put together of Sammy's hospital journey -- he came home from the NICU on the 10th of July, and has been doing GREAT ever since! We praise God for him daily, and are thrilled to share his story with everyone.

I am thrilled to have gotten to go visit them this past weekend, and share in his welcome home party. It was such a blessing to be a part of such an event. It was a beautiful night - and there was even a time for friends and family to share how this story has changed their lives.

Sammy is now over 10 pounds!

I can't even put into words how much I love Cindy, Robert, Taylor, and Sam... I am honored to be Cindy's sister, and watch Sammy's life as he grows. Taylor is an amazing big sister, and Robert has faith that literally moves mountains. We love you guys, and the boys can't wait to get into all sorts of mischief with Sam! 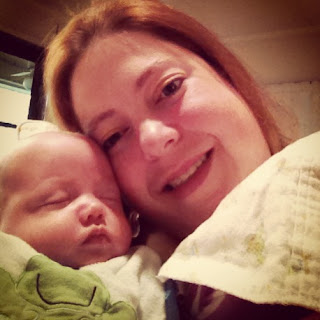 Posted by Kim H. at 10:05 AM
Email ThisBlogThis!Share to TwitterShare to FacebookShare to Pinterest
Labels: Family, Infertility