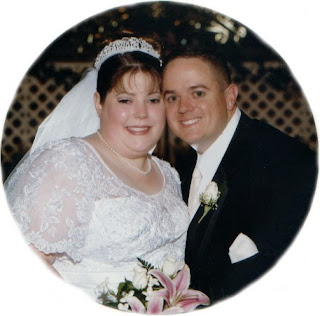 I was asked to write this for our church's women's retreat - it was put in a booklet that was given to all of the attendees at the end of the weekend. I'm so honored to have been a part of the book, and given a real reason to sit down and write out how I got to this point in my life.

My testimony begins with only growing up with a very basic knowledge of Jesus, in that I attended church with my Dad as a very young child on Saturdays at the small Catholic Chapel at the Brenham Hospital. My Mom grew up Baptist, but has never really practiced her faith. With parents so differing in their faith – I was never really brought up in church at all.

Fast forward to college, and I met John just a few months before my 21st birthday. He grew up knowing Christ, and really was the first person to talk to me about the gospel and his beliefs. At the time, I wasn’t sure what I believed and just wasn’t ready to pursue a walk with Jesus. We got married February 23, 2002 and things were great for a while. I wanted children so badly when we got married, I hoped that we’d get pregnant on our honeymoon. God had a different plan. By 2004, I started seeing a fertility specialist but that doctor at the time told me there was nothing he could do in light of my diabetes – so John and I started having some problems.

In early 2005, John moved out of our apartment. It wasn’t just one single issue that caused our issues… they were most of the major ones that come up in marriages – money, sex, and fertility. He was gone for the weekend before we started talking again and deciding if we could work things out. During his weekend away, he had gone to church with his family again. He told me about his experience rededicating his life to Christ, and we decided that after the following work week I would come help him move his things back home. That Sunday we went to church together – I think it was the first time I’d been since our wedding, and I dedicated my life to Christ that Sunday in April of 2005.

We joined a church here in Cypress, Fellowship of Houston (it’s since dissolved), we attended there for 2-3 years until that church merged with The Met. We didn’t feel at home at the Met, so we joined Cypress Family Fellowship when we were still meeting at the YMCA.
Posted by Kim H. at 7:30 AM
Email ThisBlogThis!Share to TwitterShare to FacebookShare to Pinterest
Labels: Married Bliss, Spirituality