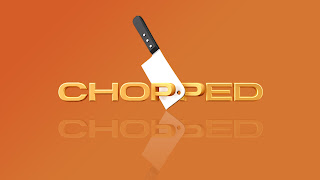 I feel like by now, most everyone has heard about the show chopped. It's the show where they give the chefs mystery baskets of ingredients for each round, and at the end of the round one chef is eliminated from the competition until there is one winner.

Well, since we had a vacation a couple weeks ago -- we're a little bit short on funding until John gets paid this week... so our culinary adventures this week will look a bit like an episode of Chopped. We are shopping from our pantry, and hoping that we can make it until this weekend before we need to stock up. It'll be crazy though because we not only need groceries, but it's time for a Costco run too! Keepin' it real folks...keepin' it real.

It's interesting how our pantry still seems full, and our fridge/freezer seems full too... but we are out of almost all meat -- and I'll be scraping things together to make them work. Thankfully the boys mostly just want hot dogs, and John is gone most of the week -- so I'm just scraping it together for myself. I can do this!

Maybe I'll even come up with something new that I can work into the meal plans. It's hard to imagine though because I so enjoy trying new recipes -- Pinterest is my meal planning friend. Most work out well, but there are a few flops. I tried a recipe for a honey lemon chicken that was just disgusting! I mean John and I were so grossed out. We clearly just don't like our savory meals to have a major sweet element.

I should have known when the sauce called for 1/2 a cup of honey... but I thought the lemon would balance it out, not.so.much. Oh well, it gives us something to laugh about when the kids to go bed. I can only imagine if I'd tried to feed that to them too! "Mommy dis not good!"

Happy Monday folks! I hope your meals are all planned and that they come out tasty!

Posted by Kim H. at 8:54 AM
Email ThisBlogThis!Share to TwitterShare to FacebookShare to Pinterest
Labels: Meal Plan Monday