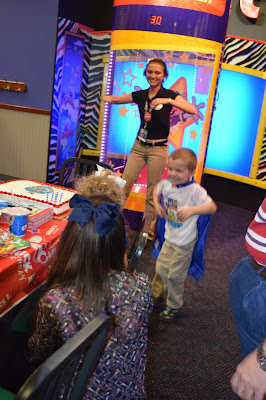 You see this guy with the cape? Whew, he is a whirlwind! He is always happy and has a great time everywhere he goes... he has never met a stranger. He is a bit impulsive, and struggles to stay focused. When he was 2, he was diagnosed with neurofibromatosis type 1.

Neurofibromatosis Type 1 (NF1) -- Neurofibromatosis type I (NF-1) is a tumor disorder that is caused by the mutation of a gene on chromosome 17 that is responsible for control of cell division. NF-1 causes tumors along the nervous system. Common symptoms of NF-1 include scoliosis (curvature of the spine), learning disabilities, vision disorders, and epilepsy.

To be clear, at this time, James has none of these tumors, and all of his MRIs have come back clear. He does have the spots, and definitely has ADHD - fairly severe ADHD actually. He struggles with what they call motor planning, as well as being able to be still to do anything for more than 15ish seconds depending on the activity. He can hyperfocus on certain games and videos on his iPad, but most other things he can't stick with.

He has been in therapy for a year and a half now, and some things have started to click a bit for him. His fine motor planning has been the biggest delay for him, and he still struggles with pinching and gripping things properly, but we still work with him. We've had to stop therapy because private therapy was just too expensive even with insurance coverage.

We did have him tested earlier this year for a special program within the public school system, and he tested out of that - so he wasn't able to get any extra help there. I was amazed that they felt like he was on par to start Kindergarten in the fall, but we're thankfully going to homeschool him and keep working on things at home.

He has seen a developmental specialist twice, and while I don't completely think she gets a good picture by sitting with him for an hour -- we've gotten some insight there as well. She was the one that suggested testing him for the special preschool program within the public schools - she was really the one that made me decide 100% to school him at home. She said that with the way schools here are designed - they are open concept so that all of the classrooms are in blocks of 4 that are basically only separated by bookshelves and things that leave the area open - he would really suffer with all of the distractions.

I'm not willing to let that happen to him, and I think the older he gets the more we can talk through ways for him to cope with these types of issues. There are absolutely things that interest him though - washing machines, vacuums, mechanical, and medical things seem to be things that he hyper-focuses on.

He goes to see his neurologist for a check up in a week, and it's always nice to get her input and advice. We've also got him set to start our Kindergarten program in about a month, which will be exciting to get us into a routine. James thrives on routine the most - he loves knowing what is coming next.

He sure is a sweet little guy, still wearing size 2t-3t most of the time - he has the smallest waist so we have to stay in that size for his pjs... but they look like capri pants. Otherwise we have to really cinch up his pants to get the length correct. He is still wearing the same size shoe as he was 2 years ago too. He is getting taller though, so that is good. His weight is still hanging in there at 35 pounds too. James is a precious little man, and we love him with all of our hearts!
Posted by Kim H. at 7:39 PM
Email ThisBlogThis!Share to TwitterShare to FacebookShare to Pinterest
Labels: James, Mommy Diaries, Neurofibromatosis 1