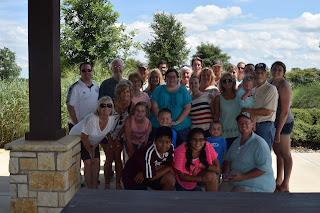 About a month ago, my Dad's brothers and families got together -- at least a good number of us that were able to attend. It was the first time I'd seen most of these folks since before the boys were born. Isn't that strange -- to think that it had been since before 2010 since I had seen these folks... and I'm thinking it hadn't been since our reunion in 2004.

It's amazing how lives scatter, and truthfully -- they've always been scattered. My Dad is the youngest of 4 boys, and I'm the youngest of the original cousins. There were 9 of us before my little brother and sister were added to the family when I was 25. Some of my cousins are so much older than I am -- their kids are only 5 years younger than me.

It was great getting together with the ones that could make it, and thankfully -- we have Facebook to help keep us all fairly close. We are able to pray for each other through trials, and cheer for amazing blessings. One group of our family wasn't able to come because their daughter was out of the country dealing with a nasty illness, and I'm grateful that we were able to pray through that with them even though they weren't able to be with us.

Others were missing because of their school/work/travel schedules, but we hope that next year will bring a few more that we haven't seen in a while. We had a lovely pot luck lunch, which there was WAY too much communication about -- seriously -- you'd be amazed at the over thinking and over planning that went into it, and the volume of food present would have served an entire army! 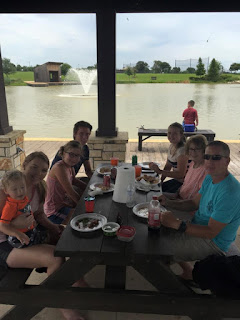 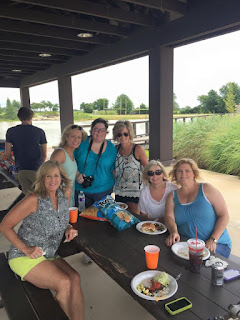 We had the blessing of a great location where our picnic was right next to a catch and release fishing pond... so a love of fishing was born for several of our family members. My brother, Josh, and Tyler in particular had a blast just reeling in fish all.day.long. 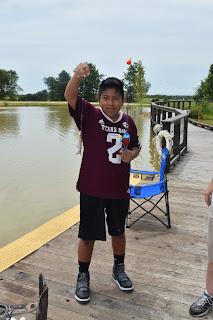 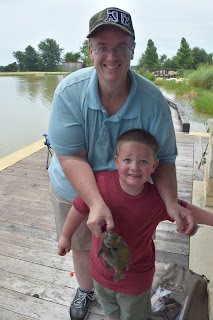 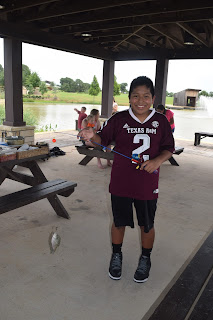 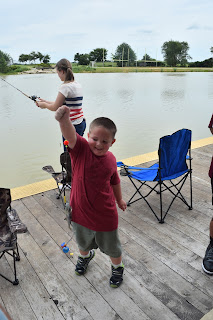 Other family members enjoyed their new selfie stick... maybe a little too much, right Megan & Brittany? They took selfies with every single family member... 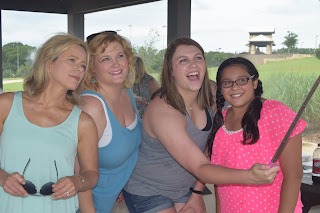 Two of my Dad's three brothers were in attendance, and it was fun to listen to them sit around and tell stories about our grandparents. Some old favorites were remembered, and some new stories were told as well. My grandparents were amazing people, and are greatly missed. When my Dad was just 6 weeks old, my grandparents and the brothers moved from Chicago to Mineral Wells, TX... driving by car back then took them 10 days to make that trip. I can't even imagine! I'm pretty sure my Gammie was a saint! 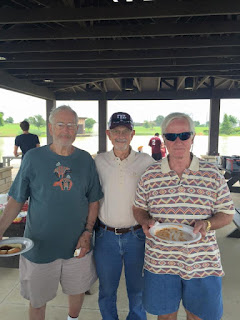 That's my Dad in the middle, and his oldest brother on the left -- and the brother closest in age to him on the right. Both of his brothers had heart surgeries last summer while I was having my brain surgeries, and my Dad had his hip replaced in December of last year... they are all doing GREAT now!

Two ladies in the photo below have MoyaMoya disease, and have had brain surgeries. One of course, being me... but another cousin of mine has also had it -- and even though the doctors say there is no genetic link that can be found to prove that it runs in families... but I have to believe that there is some sort of link. I'm so grateful for the blessings of shared stories, and a family that doesn't let distance or time get too far away from them. 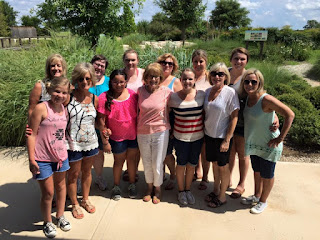 Until next year, Baileys! I can't wait to get to spend another afternoon of laughing and enjoying your company!
Posted by Kim H. at 10:58 AM
Email ThisBlogThis!Share to TwitterShare to FacebookShare to Pinterest
Labels: Family