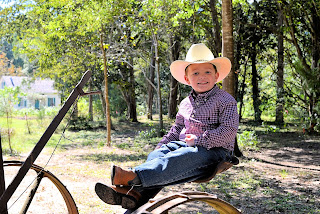 This little guy slays me. I mean really - those cheeks! He has been struggling a little bit since we started Kindergarten - he doesn't like that James now knows enough to be able to answer questions more quickly on occasion. He likes being the star student and having Mom & Dad be proud of him. He is learning new things -- and you can often hear him working things out.

For instance, his great grandmother passed away this summer -- and for weeks afterwards, he would ask all sorts of questions about why things die. Which things can die. Just trying to understand it all. We took a good bit of time before the funeral explaining to him what would happen, and what he would see. That he would see Memaw in the casket, but that it was just her body because she had gone on to Heaven. Also, that when we got to the cemetery, Daddy and his cousins would have to carry the casket over to the burial site because they were pallbearers. Then that at the very end, they would lower her down into the ground where her body would stay, and that we could come visit where her body was whenever we wanted to. We actually stayed long enough talking after the burial service that as we drove away, they watched the workers lower the casket into the ground. He took about a month and a half to work through all of that even after it was all over.

Now that we've started school, we hear him working on his phonics -- he will just stop sometimes and tell me things like: "Duck starts with D, Momma!" He is always thinking about something. He is the more quiet observer -- especially in new situations.

Lately they've been going to football games at Texas A&M, and they are much more aware of the Band and all things Aggie related. It's funny though because he doesn't really understand the WHY of it all. Meaning that he knows that A&M has a band and a football team, but he didn't understand that it is a school or what a college is even. He and John had this conversation the other night:

Tyler: Why does the band go here?
John: What do you mean?
Tyler: The Aggies - is it a different team in the band?
John: No, the band and the football team are part of Texas A&M the school.
Tyler: What do you mean?
John: Well, you know how you're in Kindergarten?
Tyler: Yep
John: In a few years, you'll get to middle school - then high school - then what we call college. That's where you'll learn things about whatever job you want to have. What do you want to be when you're older?
Tyler: A Daddy.
John: Well, you'll want to be able to take your kids to dinner, and buy them toys, right?
Tyler: Yeah.
John: So, then you'll need a job to be able to make money to pay for things.
Tyler: Oh, but I don't know what I want to do, Daddy. For my job.
John: You have a LONG time to figure that out, but you like to cook right?
Tyler: Yes, breakfast.
John: Ok, so maybe you'll want to be a chef.
Tyler: I don't want to go anywhere to do it, just at home.

So funny. I knew he was struggling a bit with the fact that I went to A&M, but that I wasn't a football player or a member of the Aggie Band. Now, I think maybe he understands a little more. So he has moved on today to showing me "Miss Reveille Ma'am" ten billion times. All four of us are going to the game this weekend, so I know he is just trying to show me the things he already knows and doesn't think I know about. It's just so funny!
Posted by Kim H. at 6:00 AM
Email ThisBlogThis!Share to TwitterShare to FacebookShare to Pinterest
Labels: Dad Life, Texas Aggies, Tyler