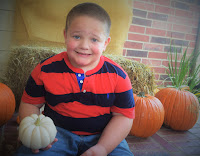 Last Wednesday, we had our regular co-op meeting with our friends, and we had a really good time. We took individual photos of each of the kids and a group photo of all of the kids. I'm only sharing my kids -- but look at these two handsome boys! I love them fiercely -- but BOY can they push my buttons!

We meet twice a month for co-op, and soon we will be starting to meet the other 2 weeks of the month to do scouting.

Anyway, this time we met and talked about the election process. We didn't get into politics at all -- just that there is a president and people run to be elected. We let the rest of that fall on the parents to educate their own kids as they see fit. 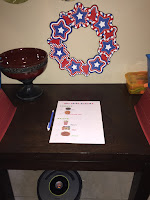 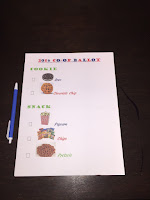 We did have a ballot for the kids to vote - they voted for their favorite cookie and snack. We had Oreos and Chocolate Chip Cookies as the choices for the cookie voting -- Oreos won in a landslide.

For the snack voting -- we had the choice of popcorn, chips, or pretzels -- we had a close tie vote between popcorn and chips -- so we were able to talk about run off voting. 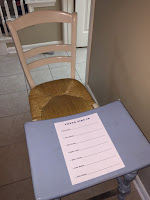 They came in and made their own voter registration cards -- which we then laminated. From there they went over to sign in at the voting booth. We had a sign in sheet for them to sign and they had to show their card. 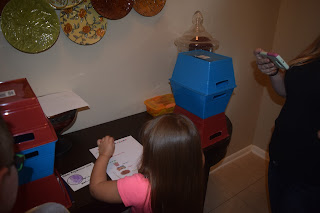 After the signed in, we had them go over to the voting booth to cast their ballot. 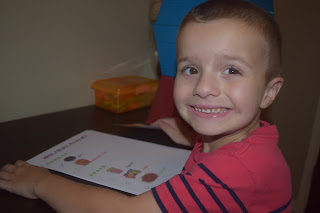 James was so excited to be voting. 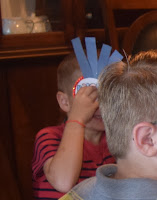 After they voted, we had a special ribbon made for them that said "Voted" they were super cute! Sadly these are the only pics I have of the ribbons... but they were adorable and hand made by one of the other Moms.

I found another picture of the ribbon later that I was able to zoom in on -- but the original ones made me laugh - so I left them too. 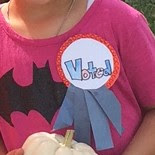 The kids have a great time getting together, and hopefully they leave with a little bit of new knowledge. This was our third meeting because our second one got canceled due to 1/2 of us being sick.

Over the weekend, I'm going to post some updates on our other meetings and what we talked about.

Next month, we're going to talk about Native Americans, Pilgrims, and Thanksgiving.

Posted by Kim H. at 1:57 PM
Email ThisBlogThis!Share to TwitterShare to FacebookShare to Pinterest
Labels: Homeschool