James got his MRI taken care of, but that was an ordeal. My poor buddy got stuck several times before the nurses decided that they should give him some gas to knock him out so they could get it. We decided that we won't ever try that again without giving him the gas, to begin with... I'm not sure who had more trauma from that experience - John or James. While James was getting his test done; Tyler, John, and I went downstairs for some breakfast. I wasn't feeling that well so I didn't eat, but we learned that Tyler has no problem with hospital food. HAHAHA.

John woke up that morning feeling under the weather, and he was set to travel to Belguim on Sunday - so I made him a doctor's appointment that he could go to once we got everyone home from the hospital. We went back upstairs, and after a few minutes, they called me back to see James. He woke up talking and has not stopped since... unless he is sleeping. They told us that he might be groggy for the rest of the day from the anesthesia... they lied. 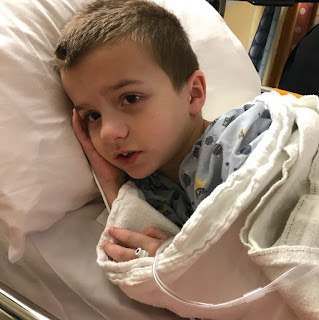 He was back full speed from the moment we got home. Ready to go, but we tried our best to keep him at a slower pace for the rest of the day. John made it to the doctor, and they told him he had bronchitis. 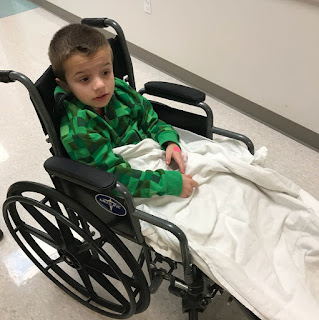 By Saturday, he had a 102 fever - so he called and talked with his team leader, and they decided to cancel his trip. Thank goodness they did that... by Monday, I was diagnosed with the Flu A. I made it to the doctor on Monday evening, and then the ice storm hit - so the city was shut down on Tuesday and Wednesday. Well, by Tuesday evening - we knew Tyler had the flu as well... but with everything closed, we couldn't get them to the doctor until Thursday morning.

Thursday morning, both boys were diagnosed with Flu B - so we've been quarantined ever since. John was able to work his meetings in Belgium from home so he has been with us the whole week. While we were at the pediatrician's office - we discussed with him the possibility of John having been misdiagnosed with bronchitis earlier in the week - and he thought it sounded plausible. He told us that the Flu test can be falsely negative, however, it normally is accurate for most -- but at that point, there wasn't any need to go back for another flu test because Tamiflu couldn't help him at that stage of the illness.

We are hoping that we can get completely over this Flu and get back to normal again -- with a good LONG break from being sick. I mean, I haven't sneezed or coughed that much in my LIFE. My shoulder blades hurt. My lungs hurt. My nose hurts. We are all exhausted. Back to bed for me... 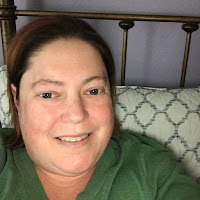 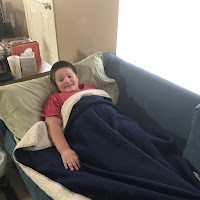 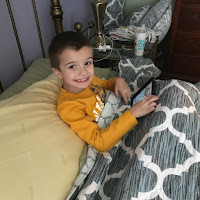 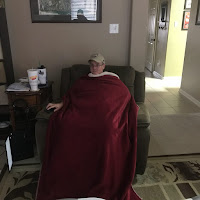