Is it a sign of things to come when you move in and initially have problems getting your warranty work done on your house? We've been in the house for a week, and have called in a few minor problems - but today took the cake.

Before we closed on the house - our builders were notified of some stains on part of our kitchen countertops. They treated the areas initially and found that the stains wouldn't come up - so they agreed to replace the two areas of the countertops surrounding our stove.

We closed on August 24th and thought that since we weren't moving in until August 30th - they had plenty of time to get the situation corrected before we moved in, but no dice. They replaced the counters yesterday, and in the process realized that they didn't make the new tops the same thickness as the old ones. So this is what happened to my kitchen in order to get the new granite installed. 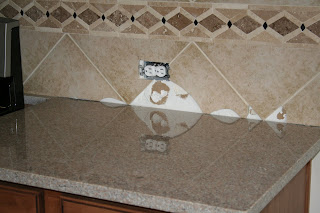 I left messages yesterday to have the backsplash corrected, but wasn't getting any response from our normal contacts. So about mid-afternoon, I got fed up with waiting. John had contacted the Vice President of Constrution for the company a time or two during the building process - so I decided it was time for my evil twin to contact him.
I sent him a very long email explaining the situation that happened yesterday - there was an issue with the color of the new granite and the builder telling me that this was what they were installing. He also said that I was lucky that the area was across the kitchen and no one else would notice the difference. (It really isn't that different now that I look at it again - or at least no more than normal when dealing with natural stone products.) Bottom line though was that I didn't feel like I was treated like a customer deserved to be treated, and I thought that the boss should know how his employees are acting.
Let me just tell you that it works every time. I not only got two calls from the VP but also from the guy, Brian, that has been working with us since our final walk through. Brian hasn't been the one that we've had problems with in the past, and let me tell you - he was really quick to call me and make sure that the situation was corrected.
I am glad that it will be fixed tomorrow, but I can't help feeling a little bit like Rocky or "She-Ra -Princess of Power." HA!
Posted by Kim H. at 7:02 PM
Email ThisBlogThis!Share to TwitterShare to FacebookShare to Pinterest
Labels: Married Bliss