I wanted to start by posting a note to my fellow WLS patients... should any of you ever find yourselves on antibiotics again - those pills are pretty big, and my doctor gave me the trick to getting our new bodies to absorb the meds yesterday... are you ready?! A pill cutter is your friend... instead of splitting my pills in half - he said I should be cutting them into 4 pieces. So you should all try it whenever the need arises.

It has made some progress with my health already... but it's still pretty slow going. I did however venture out to get my nails done - which needed to be done about the time I originally got sick... so they look light years better than they did before. And on a side note - this illness has had one benefit for me, my stomach has shrunk back to the size it was a few months ago... which is a nice little helpful boost to my weight loss. I think that all the fluids are helping some as well.

I also went to Target to spend a gift card that I got for my birthday... it was nice to just walk around the store and pretend that I'm still working and still have disposable income. I know that we're not destitute (yet) and I'm still getting paid, but in our efforts to save as much as possible over the last few weeks - we cut out all of our "fun" money - so with my birthday money dwindling away (ok - it's pretty much gone) I find myself having to entertain myself for free.

I think I'm going to look and see if we have a library close to my house so that I can look for some books and things to pass the time. Actually, I've got some reading I'd like to do on certain education topics, and with money not being in abundance - I thought reading for free on borrowed time would be a better option. It also might come in handy to know where to go if I need to beef up on my elementary literature in a hurry later on in July and August. I have to believe that there is one around here somewhere - right?

Other than that - I'm just catching up on some movies I put on the DVR, and resting when my body says that it's time. (which is fairly often still) John and our church's worship team are practicing at our house tomorrow night - so I'll be cleaning and making a special treat for them tomorrow... it at least gives me something to do and somewhere to go - it's been nice just getting out of the house for an hour a day...

John is off for the rest of the week, and originally said that he'd like to do some gardening in the backyard while he's of - but we'll have to see if he changes his mind with the incredible heat we've had lately. I'll share pictures of anything that does get done though...

I'll leave you with a few pictures of my main form of entertainment right now... only because they are a hysterical riot! 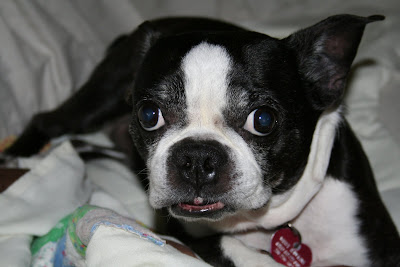 You might want to click on this one to see it closer, but Missy frequently has her bottom lip sticking out - and we think it's both cute and funny. If it's not this when she wakes up, it's usually a major underbite. 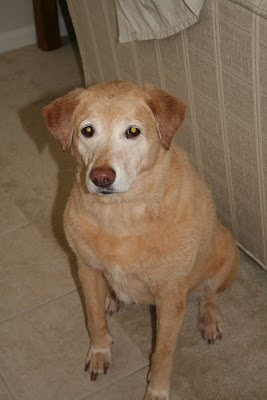 This is Maggie right after her haircut and bath... she looks happy, cooler, and not stinky! 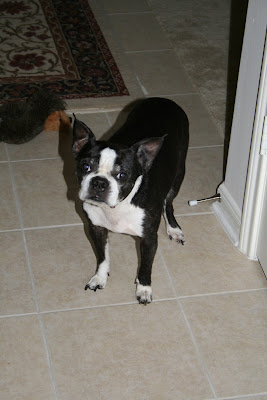 This is Missy right after her bath, I think she's actually glaring at me because she hates getting baths so much. She did forgive me though, until I put some stuff in her ears... but we've made up again.

In case you missed the post from right before my baptism - a video of her playing... it's really cute. Click here to see it.